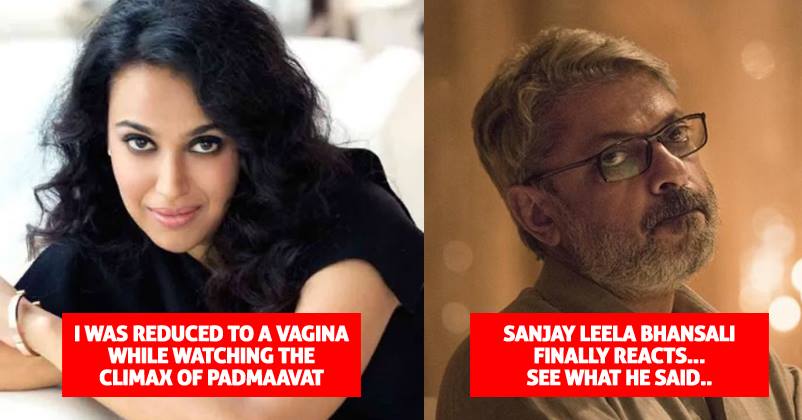 Padmaavat was surrounded by serious controversies right from the time it was announced; even though it has been released smoothly, people are debating about Deepika Padukone committing Jauhar in the climax.

Swara Bhaskar slammed the makers for this scene. She even wrote an open letter and expressed how she felt like a V**ina after seeing glorification of Jauhar.

Swara further said that she enjoys SLB’s movies, but this time, she was disappointed to see Jauhar being celebrated. Many celebrities responded to Swara’s open letter, but we all were waiting to hear from Sanjay Leela Bhansali.

Finally, SLB has broken silence on this topic and you gotta read what he said.
In an interview with Mid-Day, Bhansali gave an epic response to Swara Bhaskar’s
thoughts on Jauhar. He clarified his stand and said,

“Jauhar, in this context, is an act of war. Our men have died on the battlefield, but the war doesn’t end there. They believe that the Rajputs have been vanquished. But, the women wage the [final] war. They decide that not a single woman or child would be subjugated to rape, or violation. That’s what happened then. So, are people questioning Padmavati’s decision?”

“This film is based on a story in which the character performs Jauhar. The character doing so was convinced that it was an act of war. I feel it’s an empowering thought. She didn’t allow the enemy to win. It was a victory for dignity and honour. This is what transpired, and I can’t question her. In those days, when there was no solution, harakiri [method of suicide] was prevalent. I can’t question it. It is like asking why the Taj Mahal was made when the money spent in doing so could have been used for charity. Some will stand for it, some against it”

So, according to Bhansali, the Jauhar scene depicts “Honour” and “Dignity” and it is in no way portraying women as weak.

Continue Reading
You may also like...
Related Topics:Padmaavat, SLB

Amitabh Bachchan Quits Twitter. Is SRK The Reason Behind This?
Did Amitabh Buy Fake Followers? This Old Conversation Of Big B Has Left Everyone Confused