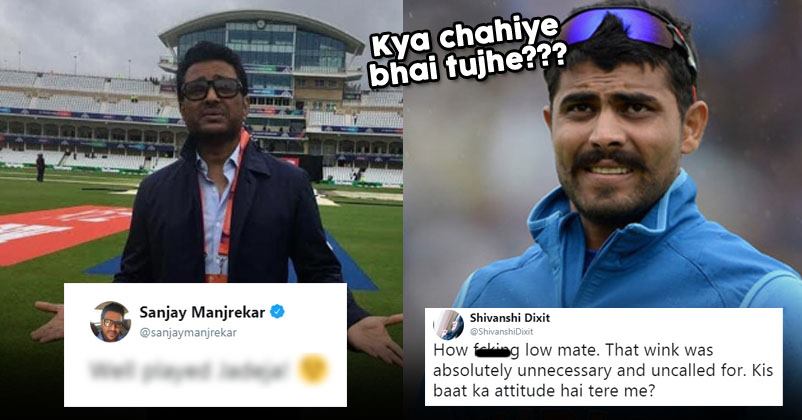 India lost in today’s semi-finals and a zillion heart broke at once. India’s performance overall in the series has been spectacular. With only one loss against England India had high hopes of winning the World Cup for us. Things don’t go as planned and expected. Nevertheless, the team played well and won admiration from across the globe.

In the midst of this, a lot of people came into the spotlight for their ‘expertise’ comments, among them was Sanjay Manjrekar. Sanjay Manjrekar heavily criticized Dhoni and Jadeja for no reason at all. Jadeja took a stand for himself and requested Sanjay to stop his ‘verbal diarrhea’. But it seems Sanjay did not take a hint and is still playing the sly game.

In today’s match after the loss of the first 3 wickets India had lost all the hope, Jadeja our knight in shining armor came to our rescue. He played a brilliant inning and scored 77 runs today, besides the tensed condition India was in. When Jadeja got out, Sanjay took to Twitter and wrote a sarcastic comment,” Well played Jadeja! 😉”.

Very ‘subtle’ Sanjay Manjrekar. People soon lashed out at him and asked him to take lessons rather than spreading this negativity. See how desi’s responded.

How low sanjay manjrekar you will fall?

Look likes your celebrating India's defeat as credit would have gone to Jadeja if India had won the match. Sanjay yours new in list of Anti-Natinals.

Our man got a sadistic pleasure at India’s loss to prove a point. Really despicable

Is it a teaser? You seem to be in a cheeky mood.. Are you happy that India lost?

How fcking low mate. That wink was absolutely unnecessary and uncalled for. Kis baat ka attitude hai tere me?

What's that wink, you asshole!

We would have accepted it as a sportsman spirit but the way u used a winking emoji 😉, you lost people’s respect. As if u r happy that @imjadeja couldn’t take the team to the finals. Disgusting. You were never a great player and doesn’t seems to be a good human being too #CWC2019

This tweet does not seem fair to a lot of people and is not justified too.

India Loses The Semi-Finals, Fans Still Stand Strong With Our Men In Blue
‘Never Abuse The Game’, Waqar Younis Takes A Dig At Team India, Desi’s Show Him To Never Mess With Us