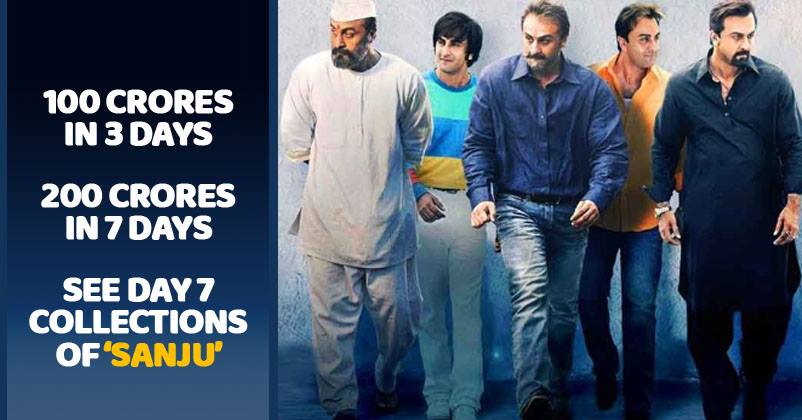 Ranbir Kapoor starrer “Sanju” which is based on the life of Bollywood star Sanjay Dutt released on June 29 and received positive reviews from audience as well as critics. It won’t be wrong to say that this is the biggest film of Ranbir so far and has taken his filmy career to a new height.

Rajkumar Hirani’s directorial skills mesmerized audience once again and “Sanju” took the box-office to storm from the first day itself, breaking many records and beating all the three Khans. On the opening day, it minted Rs 34.75 crore and became the biggest opener of the year while on its first weekend itself, it entered 100 crore club as it earned Rs 38.60 crore and Rs 46.71 crore on Saturday and Sunday respectively.

The magic didn’t fade even on Monday despite it being a working day and “Sanju” managed to collect Rs 25.35 crore. The good figures continued on Tuesday and Wednesday too as the movie earned Rs 21.50 crore and Rs 18.25 crore on its 5th and 6th days respectively.

Talking about the 7th day collections of “Sanju”, 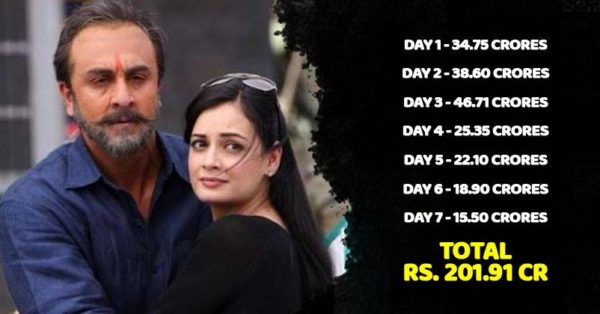 Well, this is definitely a good news for the makers as well as Ranbir Kapoor as the flick has entered 200 crore club in just a week. It’s the first ever movie of Ranbir that has made it to 200 crore club and before this, three of his movies crossed 100 crore mark.

Let’s see what the flick earns in the second weekend. What do you think?

Sequel To Dhoni’s Biopic Is On Cards? This Actor Will Play The Lead Role
“Sicario: Day Of The Soldado” Honest Review Out. Read And Book Your Tickets Accordingly