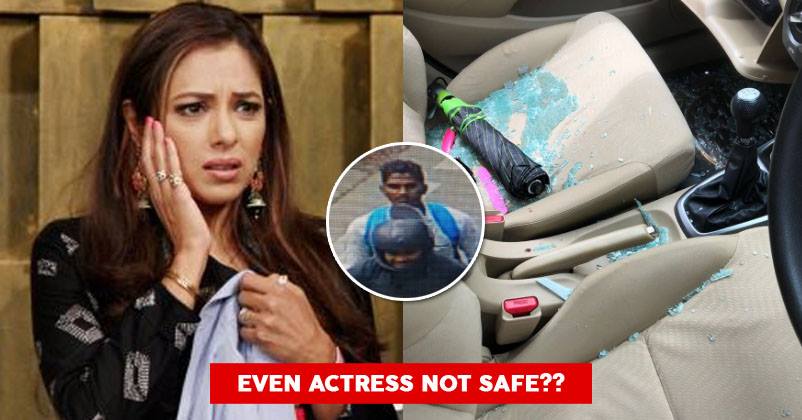 Rupali Ganguly, the popular actress from Sarabhai vs Sarabhai faced a terrible incident on Friday. 2 bikers at*acked her and broke her car window’s glass.

Rupali, who was on her way to drop her 5 yr old son for school, was shocked with these happenings. She even suffered from 2 minor injuries. The incident happened at Andheri’s Bharat Nagar signal junction in the morning.

What happened was that Ganguly’s car had a jerk and just touched the bike that was ahead of it. There was nothing major at all! However, the bikers got aggressive and didn’t spare her.

One of those bikers started abusing her while the other one broke her window glass. Even the windscreen glass was broken despite Rupali having apologized.

She took to Twitter to explain the incident and thank the Mumbai Police who helped her.

For the first time in my life I experienced #RoadRage!2 #Hooligans on a bike smashed my car window and kept hurling abuses at me in front of my 5yr old son!I dint note down the number or even take their pics-my only agenda was to get my petrified child n his caretaker to safety! pic.twitter.com/YJVZYhIDzy

Went with my crying child straight to #versovapolice and filed and FIR.. seeing the state of my car and me bleeding they all rushed to help…but all they had was this screenshot from #goodshepardchurch.. we went back to the spot and looked for the #spiritofmumbai @MumbaiPolice pic.twitter.com/G3A94OaDLM

#spiritofmumbai does not exist!!!! The people just stood there watching a two women and child being attacked in a car being by two #scums!I was on my way to drop my son to school at 8.20am! They all just stood and saw the #tamasha! Not one person came to help or intervene!! pic.twitter.com/HumDVdFUWt

Only one woman on a bike and two women in a rickshaw came later and offered to help us!!! #women!!! Where were the #men ???? @MumbaiPolice #thankyou for doing all that you guys do for this city which has the most #indifferent breed of people !!! pic.twitter.com/KEnVn6CRGH

But By 9.30pm the #versovapolice had nabbed the culprits👏🏻👏🏻! I don’t know how they did it but incredibly they had the #loosers in front of me to identify!!! #Kudos and #millionthanks @MumbaiPolice! This is the second time #versovapolice has been to my #rescue!

true #spiritofmumbai I found in @mumbaipolice !Thank you so much was restoring my child’s faith that police will punish the bad guys🙏🏻 #Versovapolice #Badguzar sir,#Om sir detection head,#mohite sir detection, #rakshe sir duty officer and #Jhende sir for always being there🙏🏻

These were the guys! The one on the left broke the glass with a punch ! Wish he would put his strength to better use than scaring women and children #RoadRage @MumbaiPolice pic.twitter.com/Kn6GeETjJh

Versova police came to her rescue and nabbed those 2 bikers. Is Mumbai not safe for actresses too?

Continue Reading
You may also like...
Related Topics:Rupali Ganguly

Rishi Kapoor Couldn’t Recognize His Film & The Actress. Got Trolled Badly
Pandya Went For Dinner With Teammates. His Gesture With Leftover Food Will Make You Respect Him