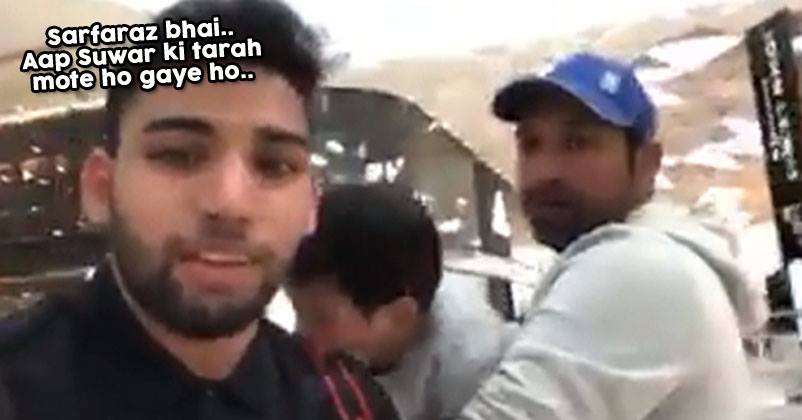 The outcome of the India-Pakistan match we all know was in favor of us. We won the much-awaited match and led to a 7-0 victory of us. Pakistani team performed poorly and it showed in the match that they are a bit unfit. Sarfaraz was also seen yawning in the middle of the match. The team was criticized a lot for their fitness.

Recently a video has emerged online, where a Pakistani fan can be seen criticizing and shaming Sarfaraz in a video. And it is purely disgusting. He calls him ‘ suar’ and this definitely crosses a line. It can be seen in the video that Sarfaraz and his kid are strolling in the mall when the guy stops and asks for a selfie. Instead, he records a video shaming Sarfaraz and this is totally disgraceful.

No manners. No respect. Absolutely disgraceful behaviour. Yes the performances have not been good but the players don't deserve such abuse #CWC19 pic.twitter.com/o8rMNTVGXI

It is really shameful how cricketers are behaved with. People all over Twitter soon came to his rescue and supported him. However they play, they still are a national pride. They still represent the country, we should not forget that.

That is absolutely not acceptable. Shame on this guy.

Look at that man's face. That kind of behaviour is unacceptable. Sarfraz, we are with you!

And look at his audacity!!! It’s a basic etiquette! Sarfaraz is with his kid, man should have gone through tough times himself! What a disgrace! Criticizing is okay but lambasting is not!! Disgusting!!

This is too much💔 He plays for your country man! He tried his best. And in future if Pakistan win because of him, will you tell him the same thing ?? 🤔🤦‍♂️

This is absolutely disgusting.

Plz dont share this , this is cringworthy … sarfraz just dont lose your focus, perform well in next matches

We can’t even understand the burden that falls on them, let alone criticize them on the basis of how they perform. We can keep supporting them, maybe that is what they need.