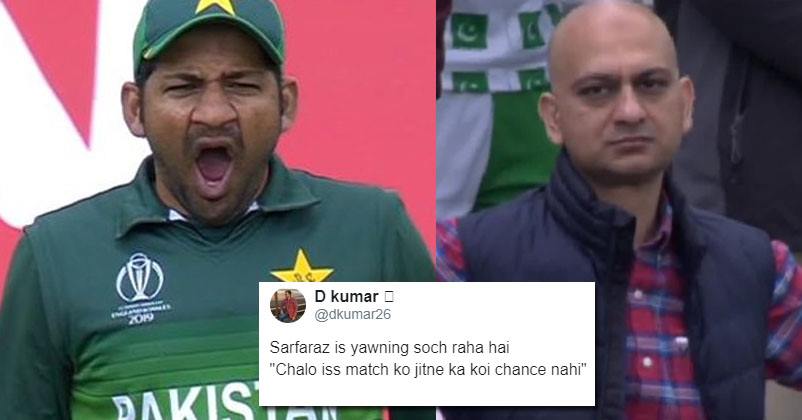 The ongoing India-Pakistan match is on its peak right now. Every Indian, as well as Pakistani, is feeling the adrenaline rush and excitement too high to explain. While two nations are stuck in front of the television, tha Pakistani cricket team captain Sarfaraz Ahmed was caught on the camera yawning.

The match is on a very thrilling node when Ahmed was found yawning on the field. The cricket fans did not like it and they started slamming Pakistani skipped calling him ‘sleep fielder’.

The internet is currently streaming with memes and jokes on Sarfaraz for sleeping while fielding. Twitterians are calling him names and brutally trolling for his unprofessional behavior.

Sarfaraz was seen yawning! He is a wicket-keeper + sleep fielder. #INDvPAK

Sarfaraz Ahmad yawning twice? India Pakistan k match k doran Pakistan ka captain so raha? And slips in 47th over and no slips in the middle of the innings? #PAKvsIND

Sarfaraz's yawn is such a meme-able moment.

Even sarfaraz lost the interest in the match, so yawning 😇😇#IndiaVsPakistan

Sarfaraz was yawning just before this FOUR.
It’s quite understandable. Who wants to do fielding after lench, after all! #INDvPAK

This is the second time the camera has caught Sarfaraz yawning…. are you serious? Maybe if he wakes up, he can start at least *trying* to stop Kohli’s 4s.

The only day Pakistan is having is yawning day: Ramiz raja

Did Sarfaraz just let out a huge yawn at the start of the 47th over? 😂😂 #IndvsPak #ICCWC19

Sarfaraz yawning in the match. 😴
– He couldn’t sleep last night.
– He ate too much and now sleepy?
– He bored.#SarfarazAhmed and his Yawn sambandh.
@cricketworldcup @ICC

Pakistan won the toss and decided to bowl first. India had a great start and with the help of Rohit Shetty’s century, the team put up a score of 336 runs.