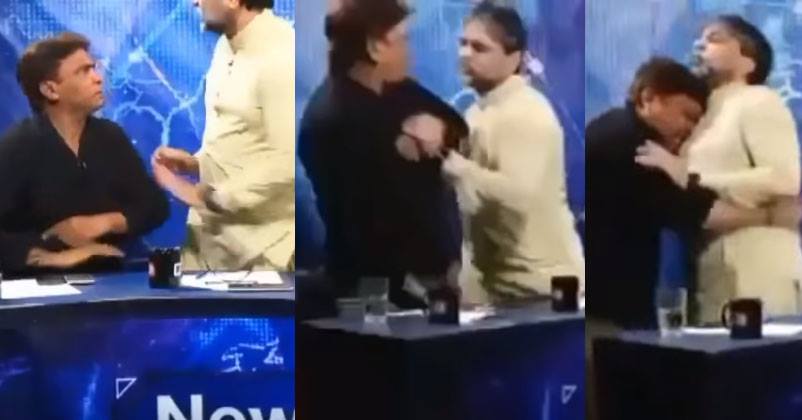 News channel debate show is quite popular in India as well as in other countries. Leaders from different political parties coming together to discuss an issue and turning the debate into a quarrel is a common site on news channels. Everybody is invited to talk but no one lets the other to speak. But very rarely this verbal fight becomes physical. But this happened during a live television debate show on a Pakistani news channel.

A simple TV debate turned into a brawl when Pakistan Tehreek-e-Insaf (PTI) party leader Dr. Masroor Ali Sial punched a senior journalist on the penal. The footage from the show named “News Line with Aftab Mugheri” went quickly viral. In the video, it is very clear that the discussion turned to scuffle within seconds. PTI Leader warned journalist and the president of Karachi Press Club, Imtiaz Khan Farhan that he won’t tolerate any insult. To which Khan replied in an angry tone and before anyone could understand what’s happening Sial punched Khan.

As soon as the video went on the internet Karachi Press Club released a statement condemning the attack. Twitterians are making fun of Imran Khan’s “New Pakistan” promise and criticizing PTI for its leader’s blunder.

its not a naya pakistan, its an old one

I am a supporter of pti but This is really disrespectfull and disgrace..#violence #masroor #pti #talkshow #ImtiazFaran https://t.co/4LkfGy1e80

Difference of opinion isn't a crime. Say what you want to say and how you want to say it but physical attack shouldn't be an option. PTI should take serious action. https://t.co/kLqJ6w8BdT

I am a supporter of pti but This is really disrespectfull and disgrace..#violence #masroor #pti #talkshow #ImtiazFaran https://t.co/4LkfGy1e80

Within 24 hours PTI should unconditionally condemn, take action & bring amicable closure to the issue. There should be no excuses or delay. @PTIofficial https://t.co/KwuGnb8uEX

Power corrupts. Prime Minister @ImranKhanPTI must be angry after watching this. If he is not, people like Masroor Ali Siyal will keep attacking journalists with impunity. How disgusting…😥 https://t.co/n2efkIFUxd

So it starts with a slap and then we have a clinch. But can't see what happens in the clinch. Was there any dirty boxing? I can't say because the cameraman did not follow the action. https://t.co/bK4sRZBwoT

I Strongly Condemn The Attack By PTI Leader Masroor Siyal On The President Karachi Press Club Imtiaz Faran.This Is Not Acceptable At Any Cost.The Culture And Behaviour They Are Promoting Is Disastrous.I Hope They Will Understand That They Are Not In Power For These Foolish Acts. pic.twitter.com/iCt8J1psQu

We stand with our Journalist community no such acts should be repaeated by anyone.

I love this type of intellectual discussions which involve physical and verbal prowess.

And lays bare the barbarian within the thin veneer of politeness-of-deception. https://t.co/sM1oW1W42x

Yez this is Naya Pakistan with zero tolerance

The guy in white dress is goals lol https://t.co/cl9Vy5olBn

This Pop-Up Warning Message For Fraudsters By Mumbai Police Is Just Too Offbeat
Australian Police Rubs Salt In The Wounds Of England Fans, Twitter Laughing With Them