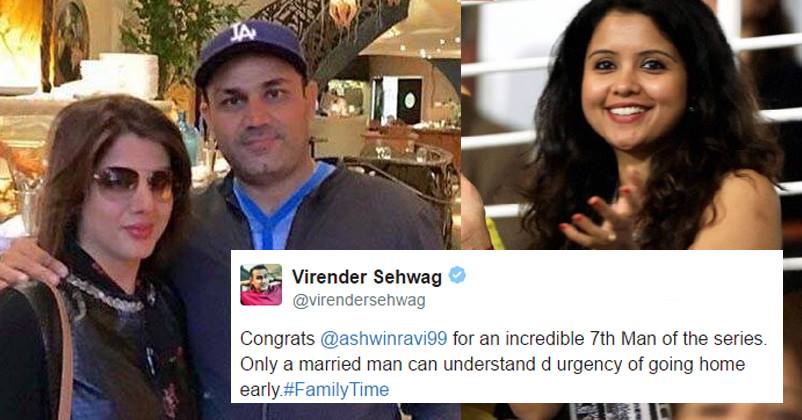 Sehwag has always been very active on social media. He doesn’t miss to share even a single update about cricket or comment on some achievement on his Twitter handle. His tweets have always been a treat to read.

Once again, he took to Twitter and this time it was for congratulating Ashwin on his 7th wicket haul in the India V/S New Zealand 3rd test match. Yes, Ashwin showed an amazing performance and became the 7th man of the match. In the 1st innings, Ashwin got 6 wickets and in the 2nd innings, he bagged 7, bringing the score to 13/40. While a normal test match goes on for 5 days, Ashwin finished in 4 days itself… However, Sehwag had a hilarious way to congratulate him. Not only Ashwin replied on this, but even his wife Prithi Ashwin trolled him. Even Aarti Sehwag joined this conversation. Well, Sehwag related this performance to his married life; have a look..

Congrats @ashwinravi99 for an incredible 7th Man of the series.
Only a married man can understand d urgency of going home early.#FamilyTime

On this, Ashwin gave a very prompt reply; here’s his tweet…

Now, this conversation was started by Sehwag, but soon Prithi Ashwin (Ashwin’s wife) joined the conversation and said that she isn’t involved in any way, in this early finish. Have a look at her tweet…

hahaha I didn't do much 🙂

Soon after this, Aarti Sehwag joined them and trolled Sehwag, who is always in a hurry while he bats.

This is indeed a very funny conversation, isn’t it? Ashwin too would follow the footsteps of Sehwag and display good performance in the upcoming matches.

Oh! So These Are The Super-Cars That Our Cricketers Own! They Are Amazing….
Virat Kohli Lashes Out At Harbhajan Singh For His Tweet Blaming The Pitch For Less Wickets!