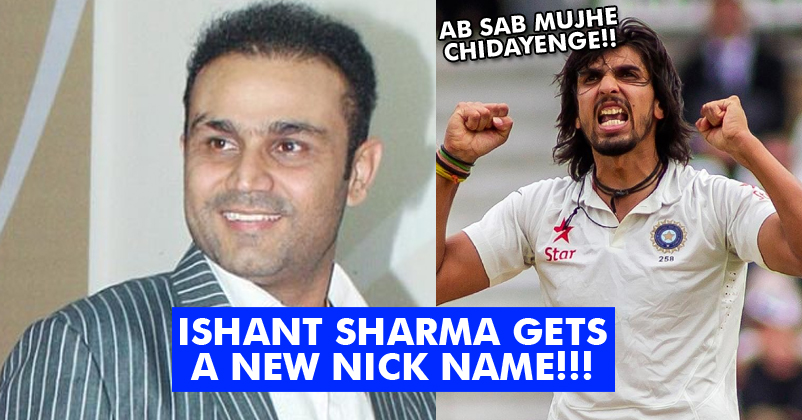 Although Virender Sehwag has taken retirement from cricket, he often makes headlines for being active on social media and fans just love to read whatever he writes, as his tweets are mostly hilarious but meaningful.

Lately, he was in limelight for giving a perfect reply to Piers Morgan who tried to target him on Twitter, saying that England would win the ODI World Cup before India wins a gold medal in Olympics. However, he later had to modify his tweet and add a word, “another”, when a tweet made from Sehwag’s parody account made him realize that India already has 9 gold medals, while England has 0 World Cup. To sum up, it won’t be wrong to say that Viru rules Twitter in his own way! Besides brilliant replies and tweets on various issues, “Nawab of Najafgarh” is also known for wishing birthdays to individuals in a unique way that only Viru can do!

The latest individual who received special birthday wishes from Sehwag is none other than cricketer Ishant Sharma! Today, the fast bowler of India celebrated 28th birthday and on this special occasion, Sehwag too didn’t break his trend of exclusive wishes.

LOL! Agree or not, there could be no better nickname than “Baal Waale Burj Khalifa” for Ishant Sharma.

Just to name the lucky ones who got unusual birthday wishes from “Sultan of Multan” in past, they are MS Dhoni, Harsha Bhogle, Kevin Pietersen etc.

And here’s another awesome birthday wish:

A very happy birthday @KP24.
When we used to play for Delhi,I always thought,
This KP will send the ball to CP 😃 pic.twitter.com/hRJWoUPiDW

What do you have to say about this style of Sehwag? Let us know your opinion in the comments section below.

This Time Sehwag Targets His Epic Tweet To His Wife Aarti & You’ll Go ROFL Reading It!
Arnab Goswami Asked Virender Sehwag To Appear On His Show, But He Denied Because…