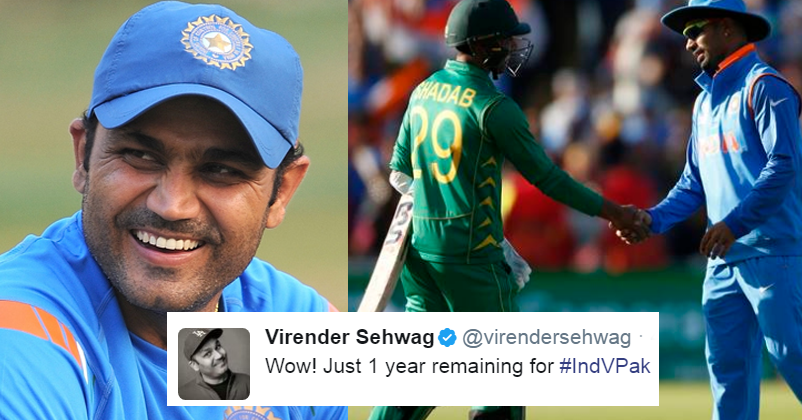 When we talk about India’s most entertaining cricket players, Virendra Sehwag’s name comes in the top contenders. The aggressive batsman used to entertain us with his fours and sixes earlier, and now he does the same with his tweets. Sehwag’s witty and humorous tweets have made him very popular on the micro-blogging site and even he doesn’t leave any chance to make proper use of his online stardom.

Just when everyone was celebrating the amazing victory of India over Pakistan in yesterday’s match, Sehwag reminded through his tweet that he had predicted this victory a year back itself.

Pointing out to his 1-year-old tweet, here’s what Sehwag wrote-

And this is what Sehwag tweeted last year-

His tweet was, of course, received with all the love from Indian cricket fans. Here’s how they replied-

Wow
Another talent of Virender Sehwag.
Recognized
He is jyotish too
Talents are :-
1.Cricketor
2.Commentator
3.Comedian
Now
4.Predictor

And everyone knows who is Baap and who is beta.

After you retired we thought the fun would be over but thank God for Twitter.🙏🙏

Trusted without any Doubt SirJee @virendersehwag
No #MaukaMauka till eternity 🇮🇳 #INDvPAK

Now this is what we call hitting the bulls eye. Be it the stadium or Twitter, Sehwag knows how to do it the right way. Don’t you agree?

Yuvraj Singh’s Post Match Tweet For Someone Special Will Make You His Permanent Fan
Mayanti Langer Brutally Trolled For Her Lungi Style Skirt! You Can’t Miss These Hilarious Trolls!