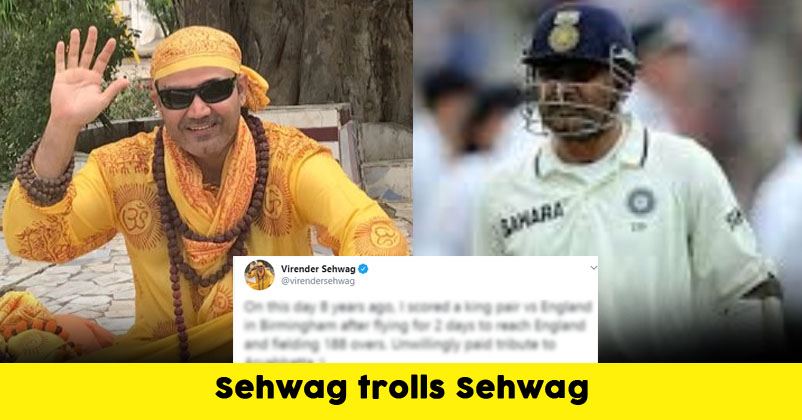 Indian cricketer Virender Sehwag has once again proved that he has a pretty good sense of humour as he recalled an incident which took place in the year 2011 on this very day. Sehwag revealed how he paid tribute to Aryabhatta, the founder of zero, though unintentionally.

India was on a tour to England and in the third test match against England, Sehwag got the king pair as in the first inning, it was Stuart Broad who got him out on duck while in the second innings, it was James Anderson who sent him back to the pavilion without opening his account. 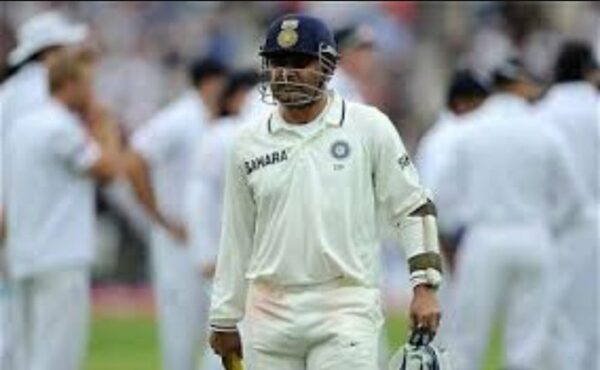 Sehwag posted a photo with the caption,

“On this day 8 years ago, I scored a king pair vs England in Birmingham after flying for 2 days to reach England and fielding 188 overs. Unwillingly paid tribute to Aryabhatta 🙂

If there was zero chance of failure, what would you do? If you have it figured, do that!”

On this day 8 years ago, I scored a king pair vs England in Birmingham after flying for 2 days to reach England and fielding 188 overs. Unwillingly paid tribute to Aryabhatta 🙂
If there was zero chance of failure, what would you do ? If you have it figured, do that ! pic.twitter.com/7VchCDASh8

Twitter loved Sehwag’s sense of humour and praised him a lot for having the guts to talk about his failures. Here are some of the selected reactions:

Haha. You are legend, on and off the field, Viru Bhai. What we remember is your fearless stance and careless smile. Love you.

We r proud for you Sir, for your that achievement…. Is not it…

Sirjee gazab ka confidence hai aapme, only you can tweet instance of a failure as opposed to soooo many successes… #Respect

Sir, we do not remember your failures. They were very few compared to the mountain of achievements that you built. Was a delight watching you bat. Had the privilege to witness your innings of 293 at Brabourne. I can proudly tell my grandkids that I saw Virender Sehwag bat!

People rarely cherish their failures…There are reasons why you love sehwag. Still the ultimate evergreen opener for Indian Cricket . Your flair is deeply missed

"Paid tribute to Aryabhatta". Ha ha ha. Brilliant sense of humor. Believe me, we won't hold that 2011 England series against any of you. It was poor planning by @BCCI. An extremely successful, yet extracting CWC, IPL, and then the English tour. Maniacal.

Ability to laugh at oneself is rare. You getting golden duck in both innings was rare as well. Salute the spirit and your tribute 😀

India lost that match by an innings and 242 runs, England scored a huge total of 710 in their first innings with the help of Alastair Cook’s 294. India scored 224 in the first innings and 244 in the second innings, making it quite easy for the hosts to win the match with a big margin.

Sehwag was the mentor of Kings XI Punjab, the IPL franchise, for three years before he left the job last year.

Undoubtedly, Sehwag has the Swag, what do you say?