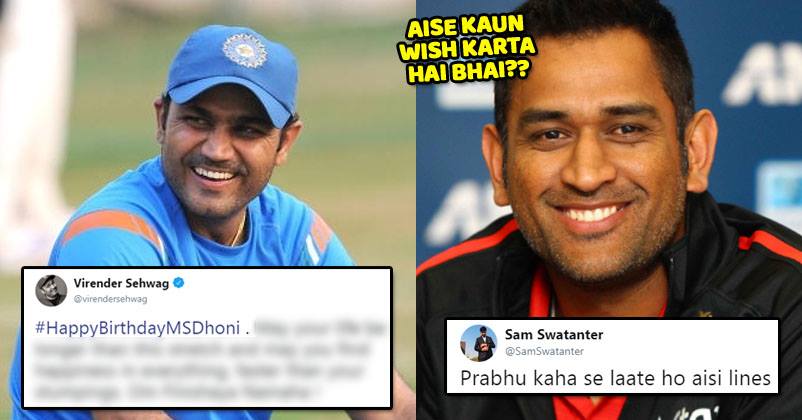 The Indian veteran cricketer Virender Sehwag who is now pretty active on social media has once again shown his talent of wittiness while giving birthday wishes to the former Indian skipper MS Dhoni.

Dhoni is not just one of the finest batsmen of the world but also a great athlete. Moreover, he is also one of the fastest wicketkeepers and does his job behind the wickets with a lightning speed. He is the most successful Indian captain as the team has won three ICC trophies under his leadership. He has taken India to the top ranking in test matches and is the third Indian cricketer to play 500 international matches.

It’s Dhoni’s birthday today and amidst all the best wishes, netizens had been waiting for Virender Sehwag’s tweet as the cricketer is known for his witty and wonderful wishes.

Viru took to the micro-blogging site Twitter and posted a photo of India Vs New Zealand 2nd T20I match played in 2017 in which Dhoni can be seen doing a leg-stretch to save his wicket.

The caption that he wrote is, “#HappyBirthdayMSDhoni . May your life be longer than this stretch and may you find happiness in everything, faster than your stumpings. Om Finishaya Namaha !”

#HappyBirthdayMSDhoni . May your life be longer than this stretch and may you find happiness in everything, faster than your stumpings. Om Finishaya Namaha ! pic.twitter.com/zAHCX33n1y

Users were in praises for the former Indian opener for wishing Dhoni in such a great style. This is how people reacted over Sehwag’s tweet:

Happy birthday to One and only @msdhoni

A role model to cricketers and others for how a leader should be.. #HappyBirthdayMSDhoni pic.twitter.com/MlzZdD39dM

No matter how poor he is playing in the beginning, he covers up in the end.
That's MSD.😍#HappyBirthdayMSDhoni @msdhoni

Sir, You are great!!
I mean how you use to manage to make these kinds of tweets😍😋😃😃!!

The best Calm, Cool & Composed captain, #TeamIndia had ever. @msdhoni, Wish u many happy returns of the day.@virendersehwag, none on this planet can be so creative in creating Birthday greetings as u have been doing so far. Keep up the good work.#birthdayboy #msdhoni be blessed

Sacred Games Honest Review Out. Nawaz Overshadows Everyone With His Classy Performance
Here’s What Actually Happened When Sanjay Dutt Met Bestie Kamli After Walking Out Of The Jail