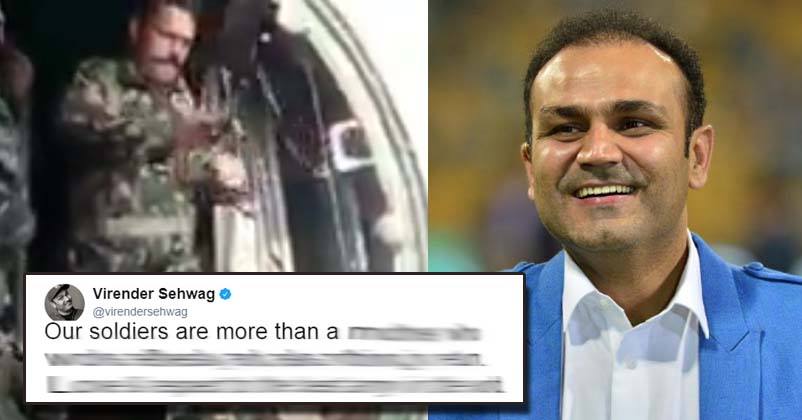 The former Indian cricketer Virender Sehwag has made a class for himself as far as witty tweets are concerned. However, the right-handed batsman is also known for his strong support towards Indian Army. He not only makes people aware of the sacrifices that Indian soldiers make for the country but also slams those who say anything wrong about the real heroes of India. Sehwag has once again posted a video, appreciating Indian soldiers and their efforts for protecting the country with a selfless heart. In fact, he goes on to the extent of comparing them with mothers, as only mothers in this world have the heart and emotions to work selflessly for their children and family. He shared the video on Twitter with caption, “Our soldiers are more than a mother who works selflessly and asks nothing in return. Love & respect to the best army in the world. Jai Hind!”

Our soldiers are more than a mother who works selflessly and asks nothing in return. Love & respect to the best army in the world. Jai Hind! pic.twitter.com/6wgX98wBnl

Because of them, we can sleep peacefully:

Huge respect to them..they are the reason for which we sleep peacefully…just by sacrificing theirs

“Thank You” is a very small word:

just because of them we sleep safely.
Thanks word is much less to thanks them for being our saviour.
Respect 🙏

A grand salute to them!

Our soldiers are the best all over the globe.Indian soldiers always stand with our country their life is tough but they do it for us.Salute🙏

You are absolutely correct, Viru!

Your tweets about our Soldiers bring Joy and Pride. Thank You.

We have the best army in the world:

Soldiers have been saving the country:

The real heroes of India:

The real heroes of the country….doing their best for country…

If our soldiers are mother, mother is not treated well in Kashmir! Unleash the power of our mother to become Durga and destroy the evil

However, few users said that Sehwag tweeted it for becoming the coach of team India:

Sehwag has 2 do nothng wth india.He gave sch type of statements 4 becomg coach of Indian cricket team.Nothing more than that.

Soldiers protect us. God bless them.Same with our farmers. They help us survive.
Lets not shoot them to death.

Good to see BCCI jokers talking for Army. What happened while opposing a match with Pak?? Who killing our Soldiers every day?? Viru is being followed by more than 10 million people on Twitter and he is the one who has asked his fans to salute Indian soldiers wherever we get to see them. This idea was praised as well as implemented at some places.

Just to tell you, Sehwag is also in the race for the post of head coach for the Indian Men’s Cricket team.