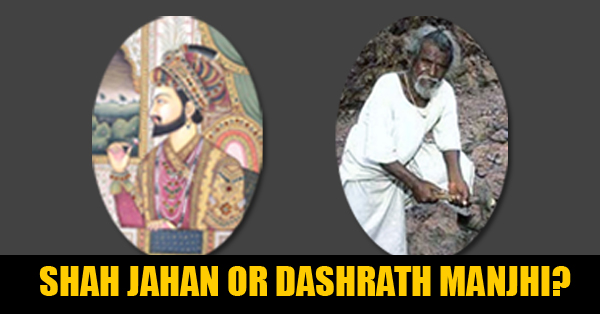 In India since ages whenever a discussion over True Love takes place Shah Jahan is the name everybody remembers and Taj Mahal built by him in memory of his Dead wife is taken as a symbol for that True Love. But was it really a true love? Or does the world need to consider it once again and compare it with sacrifices made by other people for their love. There are many who weren’t as wealthy as Shah Jahan, who never had forces and labor to help him neither did they have tools. What if someone has done something equivalent to what Shah Jahan has done but didn’t get that recognition from the people? What if someone has did it without those thousands of helping hands and without those modern tools? Would you still see Shah Jahan as a Symbol for True love?
Dashrath Manjhi a common man from a Small village from Bihar is the man you should be considering before Jumping to some conclusion. Let us here compare the efforts made by Shah Jahan & Dashrath Manjhi for their Love and then decide who indeed is an Icon for True Love.
Shah Jahan was born in a Royal Mughal Family which ruled India for generations. He was born in Riches with a Silver Spoon in his Mouth. It is said that Shah Jahan was married to 7 ladies and Mumtaz Mahal for who Shah Jahan had built the Wonderful Taj Mahal was his 4th Wife. Shah Jahan has said to have killed Mumtaz Mahal’s husband to marry her. Later on Shah Jahan had 13 children with Mumtaz Mahal and unfortunately she passed away while delivering his 14 Child. Shah Jahan was deeply hurt with the death of her beloved wife hence he decided to Build Taj Mahal as a Symbol of her love towards Mumtaz Mahal. It Took about 21 years for the structure to finally complete and took around 32 Million Indian Rupees back then for the construction. The number of workers and artisans involved in the construction of this massive structure was around Twenty Thousand. Over 1000 elephants and numerous animals were used to serve to the construction of this Monument. Today Taj Mahal is seen as symbol of Love and included in the seven wonders of the world and is a World Heritage sight visited by millions of people from around the world each year. This sounds really awesome for someone to put in all his money and efforts to build a Monument for his beloved wife. Hats off to Shah Jahan. Truly a Legend.
Let us now talk about another man who didn’t have money, who didn’t have power, who didn’t have men to work for him but still did something for his dead wife which speaks a lot about love. Dashrath Manjhi, a man from a small village of Bihar who was happily married to his one and only wife Falguni Devi.
Dashrath Manjhi who took 22 years to break a mountain just to carve a road for his village people – Gehlor in Gaya district of Bihar, India.
While his wife like everyday routine came to hand over lunch to Manjhi slipped and fell from a mountain, after which he had to take her to the near by hospital which was 55 KM away resulting in her death. That’s when Manjhi decided to break the mountain himself to make it easy for the people. It’s truly unbelievable how one person everyday dedicates himself totally for such a huge task.

Have a look at the comparison chart given below and decide who among Shah Jahan & Dasrath Manjhi is really a True Love Icon. We have no Intention to defame Shah Jahan or any such thoughts but if we consider the efforts of Shah Jahan and consider his creation as a symbol for Love, then we should even consider the sacrifices of a common man and efforts he has put to show how strong love is. We salute both these legends for their determination and love for their ladies.