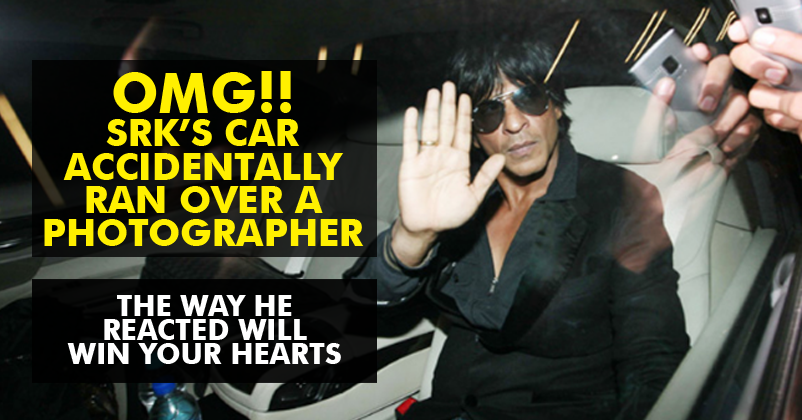 We have often heard and seen many celebrities acting rude when it comes to general courtesy while meeting their fans or media people who try to click their photos from every possible angle. But Shah Rukh Khan’s love for his fans is just limitless. Unlike the rest of the actors and actresses who usually don’t look back after committing their mistakes, Shah Rukh Khan, on the other hand, is just way too down to earth person. Alia Bhatt recently held a birthday party for herself at her house where she invited many Bollywood stars. Shah Rukh Khan was one of them too. When he reached her place, his car accidently ran over a photographer’s foot who was trying to get too close for the perfect shot. As soon as Shah Rukh Khan realized about it, he immediately got out of the car and showed his concern for the photographer’s health. Shah Rukh Khan asked his bodyguard to take the injured photographer to Nanavati Hospital and get him a proper treatment. Needless to say, the gentleman Shah Rukh Khan took the responsibility of all the medical expenses. All the media people who were present there applauded his kind gesture.

An eye witness narrated the whole incident and said, “Shah Rukh Khan was extremely polite and asked the photographer not to be scared as he will take care of the entire incident” The eyewitness further added, “The photographer who got injured is the new guy and he extremely got excited seeing the actor. He tried his level best to capture Shah Rukh in his favor and didn’t realize that he will hurt himself as the car was moving at full speed. But thankfully nothing major happened and the situation is now under control.”

Well, apart from Shah Rukh Khan’s kind and polite gesture, this incident should be considered as a perfect lesson for many reporters and fans who unknowingly risk their life in order to get that one perfect shot of their superstars. Controlling your excitement and having patience is always important in such situation because not every actor is as kind as Shah Rukh Khan. For some, it’s just the driver’s fault.

What are your views about Shah Rukh Khan’s amazing and kind gesture? Please share your opinion in the comment section below.

Baahubali 2: The Conclusion’s Trailer Is Out! It Is Intense & Special Effects Are A Treat!
This Fan Once Asked SRK How 1+1=3!! Shah Rukh Khan’s Reply Is Pure Gold…