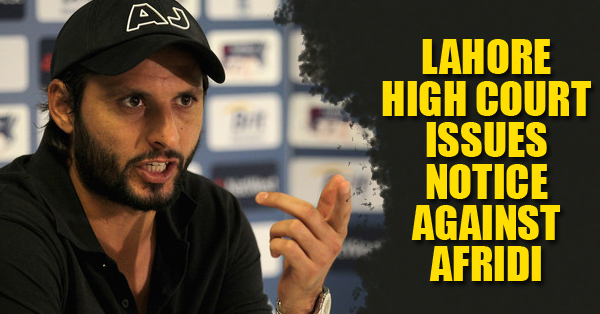 Where Millions of cricket fans across India are happy to hear what Shahid afridi has stated about Indian cricket fans in his latest Interview, Pakistan & Pakistan Cricket Fans seemed to have not liked his remark. Shahid Afridi in his latest interview held in Kolkata stated “Cricket is the Game of Fun & Enjoyment, to be Frank the Love I’ve received in India by Indian Fans is more than the love I receive in Pakistan itself”. Soon after his statement showing love for India, he was blasted by Pakistani Fans. Moreover Javed Miandad-Previous Pakistani Cricketer after listening to what Afridi stated has shown his dissent and said “I’m Hurt & Shocked by what Afridi has said, These cricketers should be ashamed for saying such things”. Hurt by Afridi’s love for India, Miandad even added that “Job of our Players is just to play well in India and avoid giving such unnecessary statements”. Troubles increased for Afridi when today a lawyer in Paksitan – Azhar Siddique filed a petition in Lahore High Court saying that Pakistani Captain’s statement has hurt the sentiments of many Cricket Fans in Pakistan and hence he should justify & explain his remarks. To which Lahore High Court today issued a Notice to Afridi seeking his explanation on his remarks in 15 Days.
Shahid Afridi certainly made millions of Cricket Lovers happy by showing his love for India but seems like he has hurt his own Country Fans.

Dalit Man Brutally Killed In Tamil Nadu & His Wife Is Serious In Hospital. Reason Will Shock You
OMG! This Is The Reason Why Government Is Banning These 500 Popular Drugs