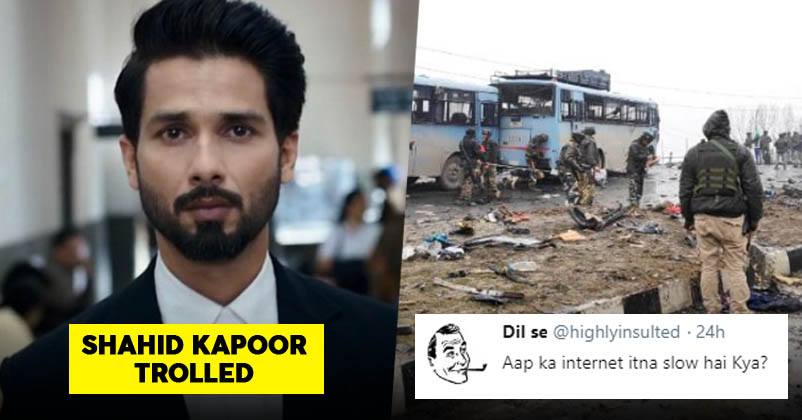 On 14th Feb, when the world was busy celebrating Valentine’s Day with their loved ones, our CRPF personnel were martyred in the Pulwama district of Jammu and Kashmir. This shameful act was condemned by everyone.

We lost over forty Jawans and many were critically injured when a car full of explosives rammed into the CRPF convoy of over seventy vehicles. This act of cruelty was claimed to be done by a group called Jaish-e-Mohammed, based in Pakistan.

The car that took lives of many Jawans was driven by Aadil Ahmad, who was a local youth, living nearby before dropping school and joining the terrorist group to make himself worthy in front of god, as he claimed in the video that surfaced soon afterwards.

This pain is unbearable and so when people woke up to this news they were devastated.Our Bollywood Celebrities condemned this heinous act and tweeted their condolences. But, Shahid Kapoor seemed to be a bit late on this. He tweeted this a day later on 15th Feb. Have a look.

Just heard about the horrific cowardly attack on our jawans. Thoughts and prayers with their families. Deeply saddened and shocked.

People got very angry. They slammed him like never before. Check these comments.

Dear it happened on yesterday, and u said just listened, Great..

Welcome back to planet Earth 🙏

Too late… Were you sleeping

Too late… Were you sleeping

Just heard, wow…. That's a great achievement being a Indian…

These Bollywood Actors Faced Rejection, We Bet You Didn’t Know About Them.
Elli Avram Broke Her Silence On Marriage Rumors With Hardik Pandya, This Is What She Had To Say.