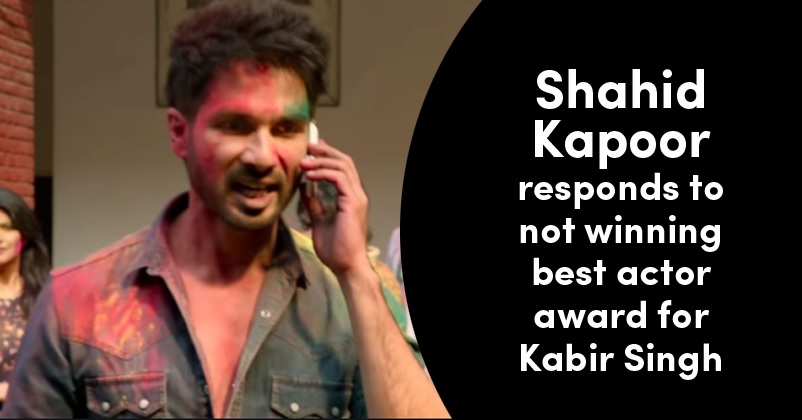 Shahid Kapoor has become one of the most sought after actors of Bollywood after the smashing success of his last release “Kabir Singh” in which he played the male lead character. The movie earned more than Rs. 250 crore on the box-office despite the fact that many voices were raised against the film as well as the protagonist.

A number of people felt that the flick promoted violence against women and was disrespectful towards the women community; however, audiences still showered their love which resulted in its attaining success. “Kabir Singh” in which the female lead is played by Kiara Advani is the remake of Telugu movie “Arjun Reddy” and both the versions have been directed by Sandeep Vanga.

Since the coronavirus outbreak has affected a number of sectors badly including Bollywood, everyone has become quite active on the virtual world as the Indians are forced to stay inside their houses. In the lockdown period, Shahid Kapoor also went online and interacted with his followers and one fan questioned him whether he is upset for not getting the best actor award because the movie attracted controversy.

To this, the “Udta Punjab” actor said that he is actually very happy for all the love that he got, adding that whatever he is, it is because of his fans.

There is no denying the fact that selecting the best actor last year was a very tough job for the jury because all the male lead actors – Ayushmann Khurrana (“Article 15”), Vicky Kaushal (“Uri: The Surgical Strike”), Ranveer Singh (“Gully Boy”) along with Shahid Kapoor did a great job.

Earlier while talking to a leading daily, Shahid Kapoor said that the best thing that “Kabir Singh” has done is that people have now started talking about the issues that women have to face in their lives and the movie has compelled the society to analyse what is wrong within. Shahid further said that a film can be made for the sole purpose of entertaining people or to make them afraid or to tell them about someone’s life story but it totally depends on viewers whether they would like to watch it or not.

Shahid will be seen next in “Jersey” which is again a remake of a southern movie however the shooting of the flick has been stalled due to the coronavirus pandemic.

Stay at home and maintain social distancing to stay safe amid the coronavirus crisis.