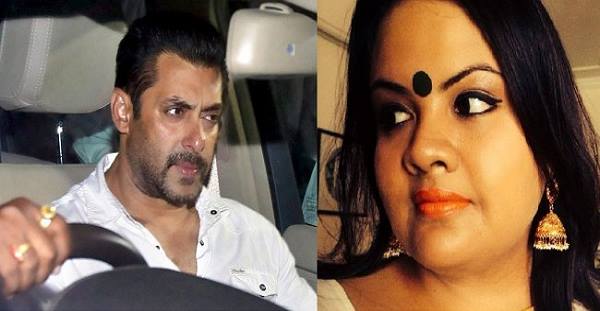 Salman Khan who is sentenced for 5 years in 2002 hit and run case and has already got bail twice, roaming freely as if he has committed absolutely no crime is now on the target of people who are not his fans. Consistently facing rage of those who want justice to be done as well as gaining support of his fans, Salman’s life is the boat which is caught in the storm, striving to be safe but on the verge of sinking down.

Even after the death of the victim and such a long hearing of 13 years, when Sallu got bail two times after the verdict, there has been an atmosphere of intense anger and discontentment among populace, which becomes clearly apparent as and when in the form of their posts as this one. The latest news as regards his bail is the Facebook post of Sreemoyee Piu Kundu who has gained fame as being the author of “You’ve Got The Wrong Girl”, “Sita’s Curse” and “Faraway Music”.

Below is the open letter written by Sreemoyee in which she has expressed her fury for Salman regarding this case:

“Just when you are impressed with justice in this country. You are bound to be disappointed. Shame on you Salman Khan. For all your Being Human bhaigiri and your adopted sister, you are just a miserable drunk, animal hunting, woman beating, drugged out, intellectually depraved, law abusing son of a rich and famous father who cheated on his wife and now lives with his wife, and mistress. Lacking the basic moral courage to call his spoilt son a criminal. A bunch of failed siblings all living off Salman’s reflected glory. And for the stars, socialites and fans supporting this giant asshole who should get nothing less than his full term of ten years in jail, if not more, you deserve this shithole of a nation – scams, crooks and corruption at every level.

Shame on you Harsh Salve. Selling your soul time and again, to callous celebs who wield political power and huge monetary influence, instead of using your fancy legal degree to help those in need – yes, I mean men and women and children living on the streets. For defending another crook who for the last 12 years has bastardised the system, being arrogant enough to miss most of his hearings, trying to use false witnesses and involve his poor driver Ashok Singh, buying out his loyalty.Shame on you prosecution and Mumbai police – for not dragging back singer Kamal Khan, another giant loser with an accent, who was sitting behind Khan when he drove over the innocent pavement dwellers. How is he even allowed to leave this country when he’s a key material witness? Shame on you Bollywood producers and directors, lining up outside the Khan residence as if there is a condolence meeting in session, ass-licking an aging star who will help you get rid of your ill begotten wealth and substandard scripts – catering to a bunch of losers who watch this trash, year, after year, after year. Earning you another 100 crores of black money borrowed from Dawood, or some other Bhai, based in Dubai, in all probability.

Shame India. These are your Heroes.

This is your judiciary.

This is your real face.

And do yourselves a favor, screw the charity theory. The he’s got a heart of gold. The million examples of how Salman Khan helps people in need. It doesn’t count when you drive drunk. Shoot a black buck. Bash up and abuse the women you love. And bribe your way to freedom after killing a man. Feeling sorry doesn’t justify what you did, or make your guilt any less.

Do you agree with her or you have a completely different opinion in this matter? Do you think Sreemoyee is correct in her opinion like many other people who want the victims of hit and run case to get justice? Share your views in the comment section and let India know what the people of this country want because it is you who have to live here, so your view matters a lot!