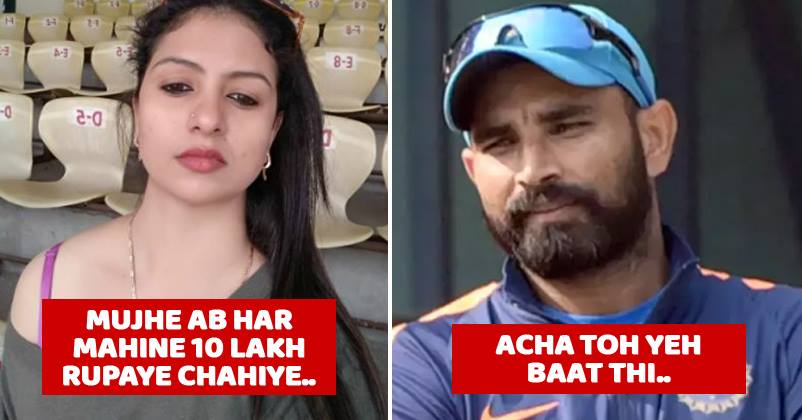 The issues between Mohammad Shami and his wife Hasin Jahan are not coming to an end and are only increasing with time.

Hasin Jahan had earlier alleged Mohammad Shami for having multiple extra-marital affairs, match-fixing, domestic violence and plotting her murder. She filed some severe complaints against Shami in police which landed him in heavy troubles.

At first, he tried to clarify the things but later he also announced that he will see her in court. Last month, Shami met with an accident and Hasin Jahan came to visit him along with their daughter. This is when Shami refused to meet her.

Now, this has not gone well with Hasin Jahan who has lodged a complaint against Shami at the Alipore court on Tuesday. She has also asked for maintenance fees of Rs 10 lakhs per month from Shami.

Hasin Jahan was quoted as saying by News X-

“I am at a loss. I had been to Delhi to meet him and was there for 7 days, but I can never forget the way he behaved with me. He also met my daughter only once. Hence, I demand the maintenance as he is not taking any of our responsibilities.”

Hasin Jahan has filed a case under the Domestic Violence Act 2005. The Alipore court, Kolkata has asked Shami and others against whom the case has been filed to appear in next 15 days.

Hasin Jahan’s lawyer Zakir Hussain has stated that this is a different case from previous one. He also alleged that Shami has not given any money to Hasin Jahan since the issue has been raised. He told that a cheque of Rs 1 lakh was given to her but that bounced. He said-

Talking about the charges by Hasin Jahan on him, Mohammad Shami said-

“I always stood beside her and I don’t know why she is behaving like this now. I still believe that the issue could be resolved through talks.”