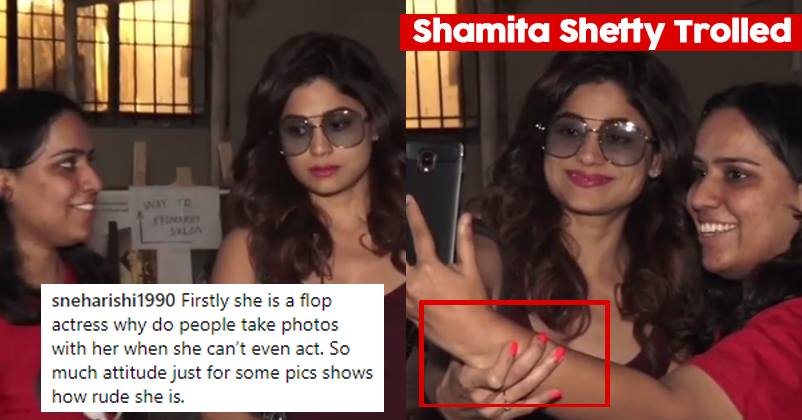 Shamita Shetty, sister of Shilpa Shetty, may not have made big in Bollywood but she is still quite a popular name. She made her debut in the Hindi film industry with “Mohabbatein” which was a big hit; however after that, her movies didn’t work well on the box-office.

Presently, she is taking part in the reality show Fear Factor: Khatron Ke Khiladi which is being hosted by Rohit Shetty. In recent times, she was also starred in a web series entitled “Yo Ke Hua Bro” streamed on Voot. The web series also featured Gaurav Pandey, Aparshakti Khurana and Ridhima Pandit.

Well, Shamita doesn’t make headlines quite often but lately she had been in news for all the wrong reasons. The diva got heavily trolled by netizens as she appeared to be upset with one of her fans who wanted to take a selfie with her.

A video is going viral on social media in which Shamita is seen walking towards her car. Just then, a girl came in between and asked for a selfie. The fan seemed to be nervous and was having difficulty in taking selfie which annoyed the actress. Irritation was clearly visible on Shamita’s face when some other fans also tried to take selfie with her.

Which is your favourite selfie side #shamitashetty

After watching the video, Instagram users were of the opinion that Shamita had been quite rude in her behaviour despite the fact that she is not a big star and people know her only because of Shilpa Shetty who is a very popular celebrity. Some people even went on to the extent of saying as to why Shamita showed so much of attitude when she is nothing on her own while several others said that she doesn’t have many fans and the few that she has will unfollow her after seeing such rudeness on her part for her fans. 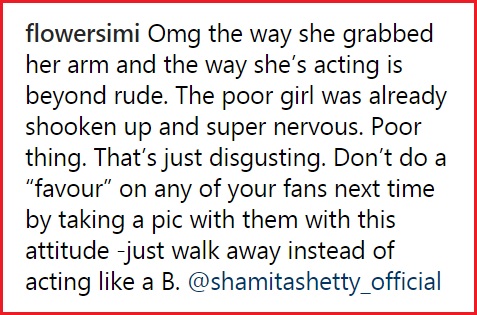 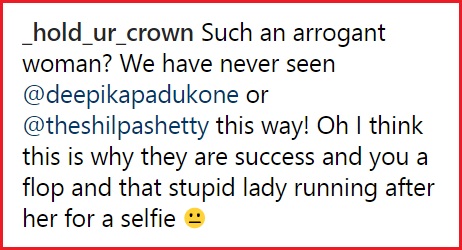 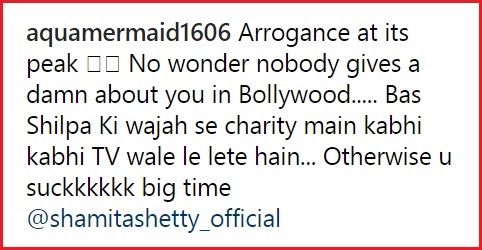 What do you think of the whole incident? Do let us know.

This Is How Katrina Kaif Replied To A Fan’s Suggestion Who Suggested Her To Marry Salman Khan
Kareena Kapoor Takes A Dig At Priyanka Chopra & Says, “Don’t Forget Your Roots”. See The Video