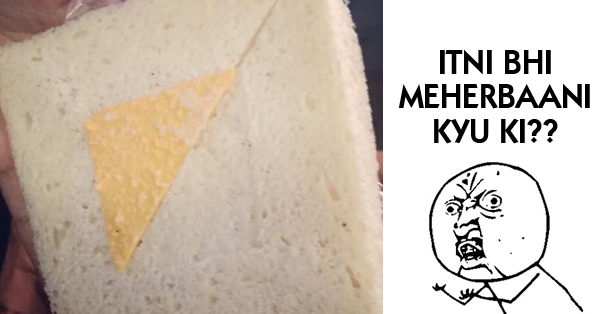 Food at Indian Trains has always been in news for Bad News. Instead of numerous efforts by different governments this is something which is showing no positive sign of Improvement. Sometimes customers get Roaches in their Biryani sometimes they don’t find egg in Egg Sandwich. And Hygiene is something you never find in most of the cases. Sometimes it is in the News for using toilet water for making Tea. The food in Indian Railways has been Degraded over the years and the consumption of Railway food is going down year by Year.
A New incident have come up recently where SARAH KADAN was travelling in a Shatabdi Express Train (A Train Which is said to be the best among all other trains for the Common man) melted down & Overwhelmed with the generosity of the Railway Caterers as they provided her this wonderful piece of Cheese Sandwich.
She Tweeted ~

Every Year Rail Budget is given so much importance and thousands of crores is spent over it but the result remains the same as always. No Improvement in Rail Food.

Proud Moment For India : Body Builder Wasim Khan Brings 2 International Title At Home
They Fell In Love, Got Married, & On First Wedding Night He Came To Know She Was A Eunuch