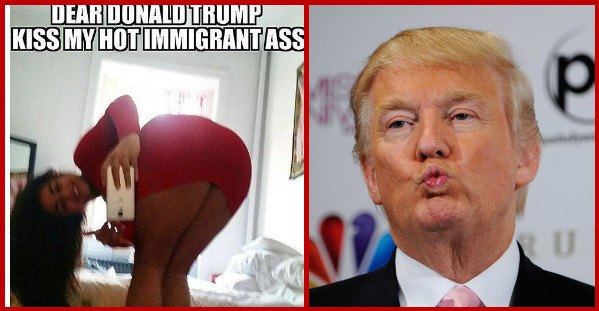 Remember the hot import in Ishq Vishq, the girl may have failed to garner limelight in Bollywood, but more often than not she manages to make a comeback and hit headline. In the beginning of the year she wrote an Open Letter to the PM & all eminent male celebs in India. And, now she is up for another mischief.

Few days ago, Donald Trump the front-runner for Republican Presidential, passed a statement saying, Every Muslim should be barred to enter the US, which sparked a huge controversy and made him an International Celeb overnight, but for all the wrong reason obviously.

After J.K Rowling, bashed upon Trump saying him to be worse than Voldemort, here is another our very own, Desi Immigrant thrashing him via Social Media, and hitting the headlines.

She took to Social Media and uploaded a picture written, This latest burn is surely here to say.

Nevertheless, the lesson learnt is – Think before you say! Donald Trump, Are you listening?

Bollywood Celebrities Who Never Kissed On Camera
These 15 Cute Photos Of RAKUL PREET SINGH Will Make You Fall In Love With Her!!