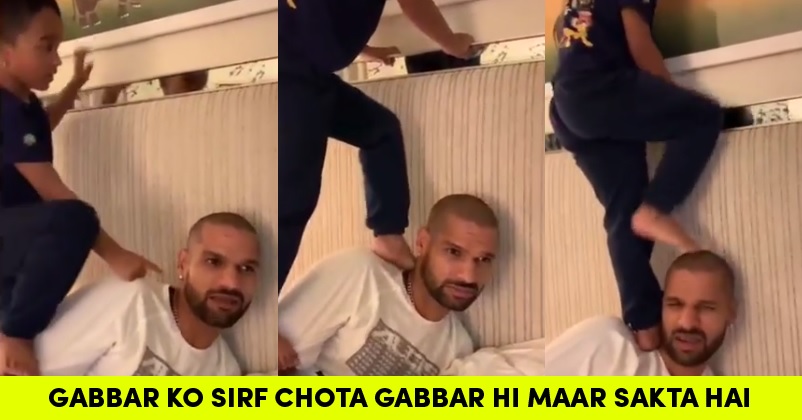 Shikhar Dhawan, the Indian left-hander, is out of the team for quite some time now due to his injury but the good news is that he will be back in the Indian squad for the T20I series against Sri Lanka in which three matches will be played. The first match is scheduled to be played on 5th January 2020 at the Barsapara stadium, Guwahati.

The Indian team is going pretty strong and it is quite difficult to make a place in the team as all the players are performing well. Shikhar Dhawan has also got the chance of coming back because Rohit Sharma has decided to take a break.

Dhawan got his knee injured while representing Delhi in Syed Mustaq Ali T20 trophy. Nowadays he is playing in the Ranji 2019-20 in which his team is battling out against Hyderabad in New Delhi at Arun Jaitley Stadium.

Despite his hectic schedule, Gabbar of the Indian squad loves to spend time with his son Zoravar and recently he shared a clip in which Zoravar is seen kicking and punching his father. The caption that Dhawan wrote read, “My head coach motivating me to play 🤣 Gabbar ko sirf chota gabbar hi maar sakta hai 😜
Zoravar and my wife are coming to visit & I am so excited to spend quality family time with them ❤🤗”

Delhi’s Ranji match against Hyderabad started on December 25 and Dhawan has been brilliant in his innings of 137 for which he played 198 balls with 19 fours and 2 sixes. This also proves that Dhawan’s fitness levels have gone up and he is perfectly ready to face Sri Lanka.

Rajasthan Royals Owner Manoj Badale Wants One More Team In The IPL
Virat Kohli Posted A Photo Of His Transformation, Kevin Pietersen Had A Hilarious Response