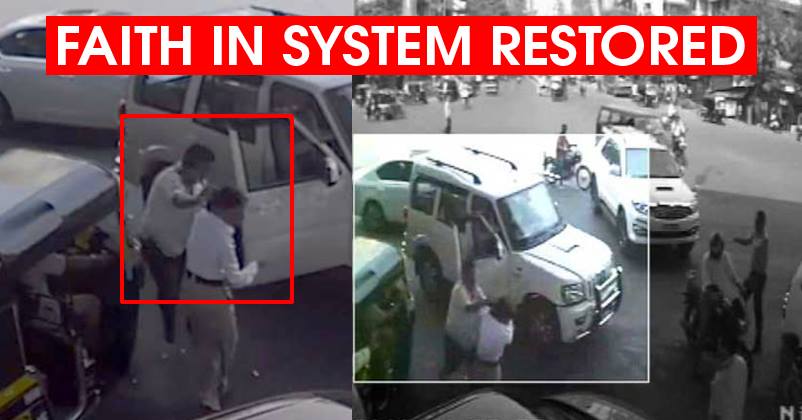 Usually traffic constables are the most hated officials for public, isn’t it? They are always ready with their penalty receipts as soon as someone violates traffic rules. On the other hand, there are also some officials who have that knack of shelling out bribe from citizens, but amidst all this, there is one traffic constable who has set a perfect example for others. She has shown a lot of courage and has done her duty really well without coming under pressure. We are talking about none other than Seema Kale, who is posted under Thane commissionerate. She has recently been rewarded Rs 10,000 (As part of a scheme which rewards courageous cops) for her excellence in performing her duty and catching hold of an abusive violator last year.

Basically, Seema was handling the signal of Nitin Company Chowk (Thane) on the 25th of February 2016. As she was busy in her work, a Scorpio passed by her without caring to look at the signal. The driver (Shashikant Kalgude, a Shiv Sena party worker) broke the signal and to add to it, he was talking on the phone; this means double violation. First, Seema gestured Kalgude to stop, but he tried dodging her. After this, she directly went and stood in front of the SUV for stopping him.

Seema stopped the vehicle and asked for the license, which further made the driver furious. He lost control and started hitting and abusing her.

Instead of getting scared, Seema faced him with courage and stood firm; she didn’t hesitate to take strict action. Seema had proof since the CCTV camera recorded everything.

The traffic Police is extremely happy with her dedication and courage. In spite of being hit and abused, Seema caught hold of Kalgude and showed bravery.

Here’s the video of the entire incident;

Hats off to her; we definitely need more constables like her…

Jio All Set To Destroy The Smartphone Market! Launching The Cheapest 4G Smartphones!
Bank Wishes To Read Your Emails If You Want A Credit Card! Privacy At Risk!