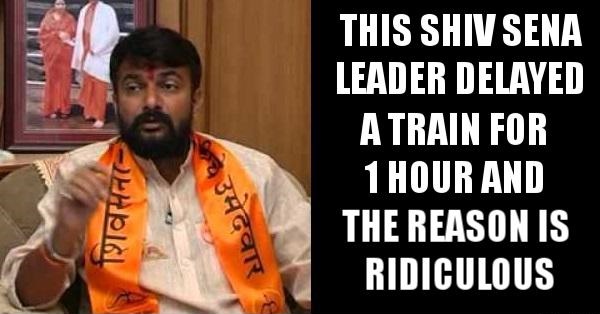 Power can corrupt a mind and Indian politicians are a perfect example of this statement. Hemant Patil, Shiv Sena MLA from Nanded, Maharashtra has once again proved that leaders of our country consider themselves above everyone else and have no concern with problems of the public.

On Wednesday night, this Shiv Sena MLA stopped a train at Chhattrapati Shivaji Terminus for nearly an hour just because he was allotted the “side” birth in the second AC coach. The train which was scheduled to leave for Secunderabad at 9.10 pm was delayed till 10.06 pm as the followers of Hemant Patil made sure that train can’t run by pulling the chain regularly. This act of MLA caused inconvenience to around 2000 passengers and not only this train was delayed but the CST-Mangalore Express and the Solapur bound Siddheshwar Express also missed their scheduled time by nearly 15 minutes.

It is not clear whether Hemant Patil’s berth was changed or he accommodated in the same berth but this irresponsible behavior of the MLA left many angry and irritated. One of the passengers said, “If a regular passenger had made such a scene, he would have been hauled off to jail. Why are elected representatives allowed to get away with such behaviour?”

Neelam Gorhe, Shiv Sena spokesperson denied to give any comment on the incident but Sunil Kumar, General manager, Central Railway, has said that he will order an inquiry into the matter.