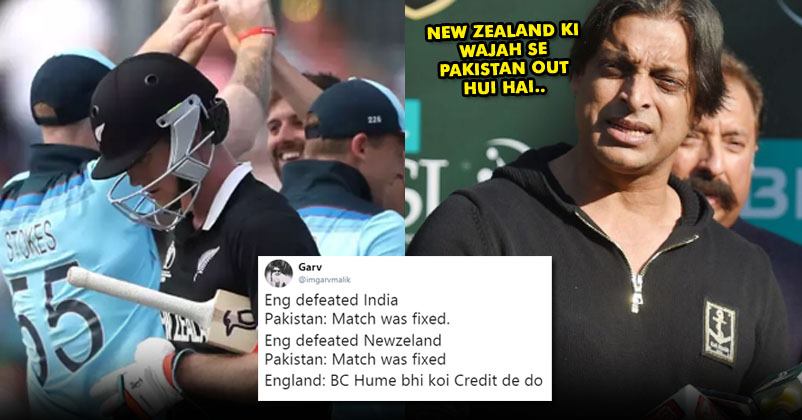 Pakistan has already lost all hopes of playing in semifinals of the ongoing ICC World Cup. The team’s performance was very poor throughout the championship. After terribly losing a match to India, the Pakistani team stands very low on the points list. The only hope to reach the second level was is England would have lost the match to India on 30 June. But that also didn’t happen.

He tweeted, “A disappointing day in the history of #cricket. New Zealand gave up so easily.”

A disappointing day in the history of #cricket. New Zealand gave up so easily.
Watch the full video here: https://t.co/PXYLE5Mjgj#CWC19 #ENGvNZ #PAKvBAN pic.twitter.com/J5hazSc5Uo

After that Twitter user started to slam Rawalpindi Express. People replied and suggested him to focus on his team’s performance and not on others’. Cricket fans are laughing on the Pakistani team that they couldn’t qualify to semifinals on their own and their fate depends on other teams.

All Pakistanis trying to hint there was this intentional pullback from England to keep Pakistan at bay, coz they were scared of Pakistan.

Tea Cup for Pakistan as they deserve it. pic.twitter.com/FtaPfvKB2n

With due respects to you dear Akhtar "Never depend on other people to make you happy because you end up being disappointed as expectations always hurts."

Why disappointing? Instead of relying another team to lose PAK TEAM SHOULD HAVE PLAYED BETTER SINCE DAY ONE! They neglected the seriousness of the tournament and HERE WE ARE……

If this is the level of thinking of a Pakistani international player, I think they not only deserved an exit…they simply don’t belong here..