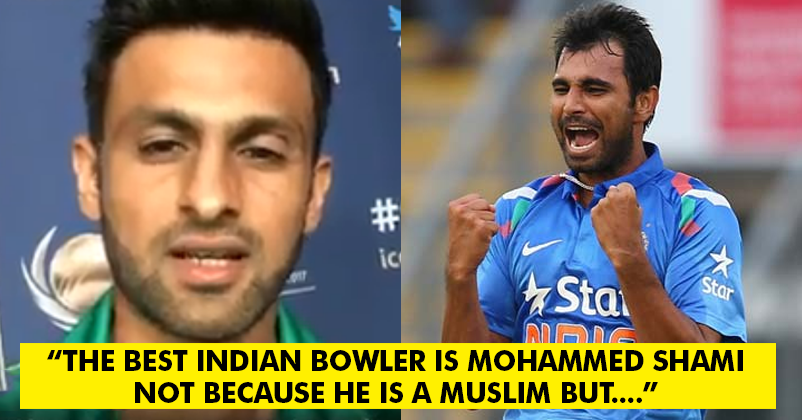 Religion in India is a very sensitive topic, so being even a bit careless while mentioning it in some conversation is a big no no. Nobody knows which word by you hurts someone’s religious sentiments. And when the person who’s talking belongs to Pakistan, it’s bound to create the controversy.

Recently, Pakistani cricket all rounder Shoaib Malik, was having a live chat with Fans on Twitter which was organized by ICC, for the upcoming Champions Trophy. Everything was going fine and the conversation was fun, until he was asked the question-

“Who is your favorite Indian Bowler?”

To this Shoaib Malik replied “Mohammad Shami”, and that was ok.

But then he started explaining his answer by saying that Mohammad Shami is my favorite Indian Bowler not because of his religion, but because he really feels the same.

Check out the video here-

Now, this irritated Twitterati so much that they started trolling him for the answer-

Would ve agreed with him had he not entered religion on it. No need to get into religion to express ur fav.

'Not because he is a Muslim guy'??
Totally unnecessary..

Statements like this are unwanted and unwarranted. Reason why people get instigated!

Not because he is Muslim guy ? That wasn't necessary to say ? Certainly not🤗

When you justify a statement you made,which noone asked a justification for,you only expose yourself and your thinking n reasoning behind it

Do you think Shoaib Malik deserved this bashing for his statement? May be he was just using the word “religion” as a safety to prevent unnecessary judgement.

Whatever it was, only Shoaib Malik knows. We hope he just thinks twice about the words next time he mentions the word religion. It’s too sensitive bro!

Continue Reading
You may also like...
Related Topics:cricket, Shoaib Malik

Rishabh Pant Posted Video Driving His New Mercedes & It Might Land Him In Trouble!
Indian Cricket Team Is Totally Frustrated With Coach Anil Kumble? Here’s The Reason Behind It!