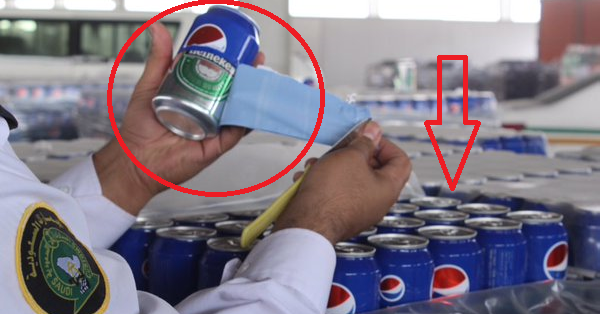 Have you ever heard about beer cans being disguised as Pepsi? Sounds strange and shocking but true……

In this article, we present you something weird which is true to the core!! According to Saudi Arabia’s customs officers, they have come across a bizarre case wherein several smugglers made an attempt of bringing illegal beer cans which were being disguised as the cans of Pepsi, a soft drink. As per the officers, about 48,000 beer cans which were moving through al-Batha border have been seized. What’s more, a video is also uploaded on Twitter in which a custom officer is shown opening the outer wrapper of a fake Pepsi can making use of a cutter and shockingly, what comes out is a green-&-white Heineken can beneath the wrapper of Pepsi. Here’s a tweet in this connection, although not in Hindi or English language:

It’s unlawful and a crime to drink or possess alcohol in Sunni kingdom of Saudi Arabia in view of the fact that it’s ultra-conservative; however, smugglers have an idea for just anything….

What are your views in this connection? Share your opinion with regard to the article in the comments section below.

Four Months After Suicide, A Failed Engineering Student Declared Passed After Re-Evaluation
SINGH Kills Tiger When It Attacked Him