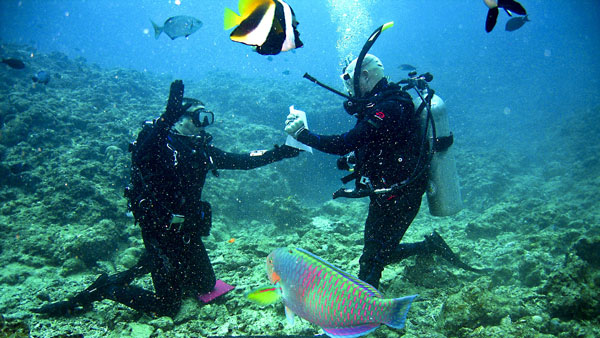 People go for scuba diving to have some adventure and bring thrill in their lives but there is a scuba diving instructor who is transforming this moment of adventure into moment of exploitation for ladies. He has been to jail because of sexual harassment charges against him, but still he is working as an instructor and there is no improvement in his behavior, in fact he termed women molestation as “just playing” with them whenever he is asked about it.

The shameful acts of Dhirendra Rawat, the scuba diving instructor, came into news when he was talked about in a blog post of an IT Professional in which the IT girl described the incident that she faced on January 26.

She wrote, “The monster had my breathing equipment in his control and my oxygen tank in his hands. As we swam across the corals, his hands were no longer on my diving equipment… The shock slowly turned to fright when his hands began to move across my body… I tried to break free but the grasp was too tight. He then signalled asking me if I was okay. I signalled with an ‘OK’. 12 meters below sea level, with my breathing equipment under this monster’s control, I didn’t dare show any fear.”

The blog tells us that Dhirendra has been alleged to molest three ladies at least, when he was with them undersea during scuba diving. Police has arrested him two times, however later on he came out on bail.

In the words of Sudarshan, Byndoor sub-inspector, “The charge sheet was filed at Kundapur JMFC Court. He didn’t having a diving permit in Uttara Kannada, so he would come to Malpe and Shirur beaches in Udupi district and take tourists off the coast to remote islands.”

Despite the fact that the District Administration doesn’t permit him to work as scuba diver, still he is working as an instructor in Uttara Kannada. The first case came in light in November when he molested a girl, but she refused to file an FIR due to the fear that it can have a bad impact on her future. Second victim was a Lady Doctor from Punjab, she took action against Rawat by filing a complaint against him in Byndoor Police Station, Rawat was in custody after getting arrested in January but later he was released on bail.

When The Times of India correspondent called up Exploita Scuba Diving, who hires Rawat as their Scuba Diving Instructor and asking them that how can they hire a person who has sexual molestation cases against him, this is what they said, “Tell me which corporate entity doesn’t have cases against it?” However, when he was given detailed report on Rawat, he was shocked and said that management will take this into consideration and may also stop dealing with Dhirendra Rawat.

Girl Of 14 In Critical Condition, Set Herself On Fire After Uncle And His 4 Friends Gangraped Her
Breaking News – Sachin’s Daughter Sara Tendulkar Is All Set To Enter Bollywood