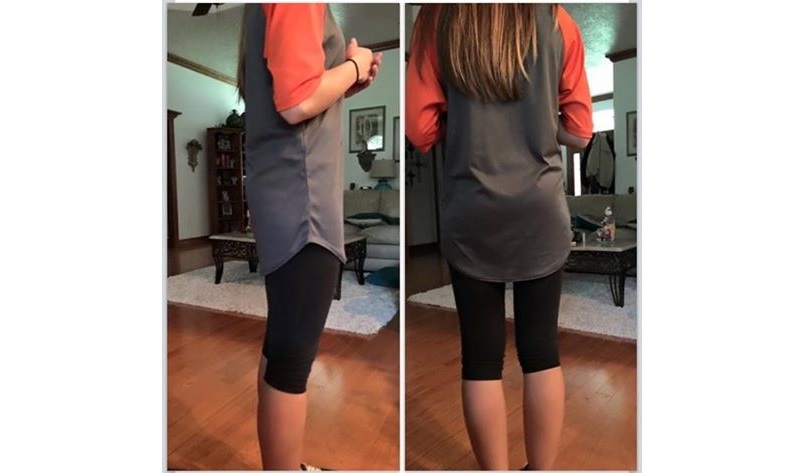 Quite often, there has been discussions regarding healthy body image and we assure to follow this idea in our general life. However, if truth be told, only few of us abide by it in actual fact.

Macy Edgerly wore a decent and elegant outfit, a long shirt with leggings that could perfectly cover her body and did not appear to be obscene or objectionable from any perspective. See Macy’s photo shared by her sister, Erica Alyse Edgerl, on Facebook. If you take a look at the snap, it would seem an entirely regular and ordinary outfit to carry for a school-going girl but probably for Macy’s school, it’s not something usual or common.

The girl had been sent home back just because she fore a dress that covered mostly all parts of body.

Read here what the girl’s sister posted on Facebook along with her image in that uniform,

“Today, my sister was sent home from school for wearing the clothes in the picture below. And I’m sorry but I have to stand up for my family and for women who are degraded and judged for their bodies and clothing every day. People wonder why women feel insecure about their bodies or what they wear.. And it’s because you’re told your clothing is inappropriate when you’re completely fully clothed, even when you’re not showing cleavage or anything. How about instead of body shaming women, school systems should start teaching 15-18 year old boys to stop degrading women with their eyes and contributing to the rape culture of today’s society.

Bottom line, girls cannot go to school in comfortable clothes THAT COVER EVERYTHING because school systems are afraid that hormonal boys won’t be able to control their eyes and minds. And that is such a bigger problem than worrying about clothing. No, I do not believe that all boys in middle school/high school degrade young women or sexualize their bodies. That is my point.. this is not an inappropriate outfit, yet some are worried it might be seen that way, so they send girls home to change to try to avoid an issue and THAT is the problem.

Not to mention, when you send someone home because of inappropriate clothing, you’re taking away from their education. So I guess it’s more important for boys to not have distractions (even when there aren’t any) than a woman’s education. When will people realize how big of an issue this really is?”

SHOCKING – RR Player Offered Money For Fixing Up IPL Matches!!!
Virat Kohli Spoke For The First Time, Says “I AM HURT” & Not Guilty For Defeat In Semis