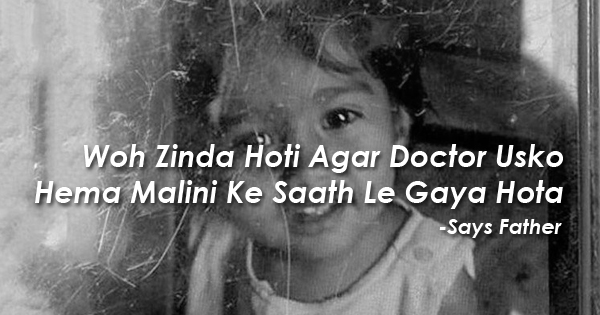 All of us are Aware by now of the tragic accident that took place yesterday on the Agra-Jaipur highway, where a Mercedes (Carrying veteran Actor & BJP’s MP Hema Malini) rammed an Alto carrying a Family of 5 members of the Khandelwal family in which a four year old baby had died & others were severely injured. But more shocking news came up when the Baby’s Father spoke to the media about the Incident. He said:

“Agar woh Doctor Hema Malini ke saath meri beti ko bhi le jaate to shayad woh(sonam) bhi zinda hoti” (Had the doctor who reached the accident spot took even My Daughter along with Hema Malini, even she would have survived)

A relative of the family said to the media that the mother is still not informed about the death of the Baby as her condition is still bad after the accident. But she is constantly asking her Husband (Sonam’s Father) where the baby is.
This surely has nothing to do with Hema Malini but this gesture of the Doctor who took Hema Malini to Fortis Hospital raises several questions:

1) Why didn’t he even bother to look at the other victims severely injured? Why did he just take Hema Malini and leave others behind?

2) If this is true then does the Life of a common man has no value? Is it to be assumed that Celebs and politicians are to be given importance even though somebody is dying?

3) What about the mother who still has no idea that her child is dead? Moreover Parents couldn’t even attend Baby’s Funeral pertaining to their injuries!

This news has left us in Shock. Doctors who are considered to be Gods, who save lives of others, how could he just let the 2 year old die? We are not here to raise any question of doubt against the entire community but that individual who had the chance to bring back the life of this little child.

Share your views and comments in the Comments Section below.

Relaxation Of Cut Offs For Girls In DU
THE MOST SHOCKING CASE: UP Police Is In Search Of A Ghost Which Has Created Terror In Allahabad