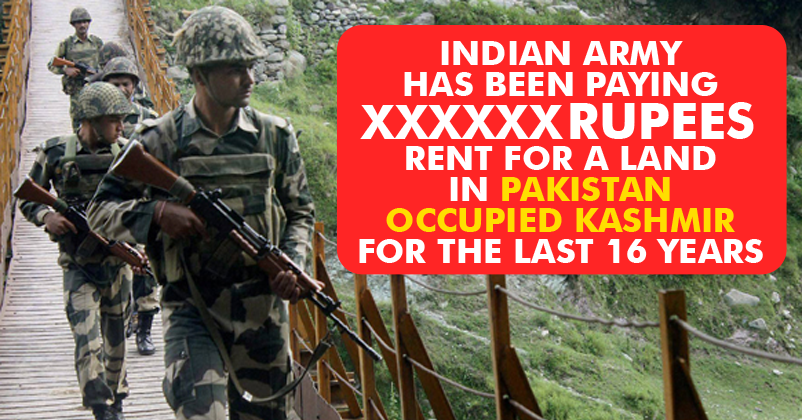 We all know about the surgical strike that the Indian Army conducted across the LoC in the Pakistan occupied Kashmir but you will be shocked to know that the Army was paying rent since 2000, for a piece of land that is located in PoK. An investigation into the matter has been started by the Central Bureau of Investigation. As per the FIR filed by CBI, all this started in 2000 and the persons allegedly involved are then Sub-Divisional Defence Estate Officer, Patwari, Nowshera as well as some other individuals.

“It has been learnt that as per ‘Jamabandhi’ register for the year 1969-70 of the land in question, Khasra no…it is under the occupation of Maqbooza Pakistan but rents are being paid by Defence Estate to the alleged owner.”

In the initial investigation, it has been found that R S Chanderwanshi, then Sub Divisional Defence Estate Officer, Patwari, Nowshera Darshan Kumar and some other individuals, including some Rajesh Kumar, showed the PoK land as “on rent to Army”.

It is also written in the FIR that the board which comprised of an Army officer, estate officer and some other officials kept paying the rent for around 122 karnals of land because of fake documents that were given to them. Nearly rent worth Rs. 4.99 lakhs has been paid by the officials and the Indian Army has incurred losses amounting to Rs. 6 lakh in the case. “It has been further learnt that the Army acquired the land on rent from civilians. A board comprising Army officer, defence estate and revenue department approved the rent after physically verifying the land, but in this matter the Board of Officers, in criminal conspiracy with each other wrongly verified that the land was acquired by the Army, whereas the same is situated in PoK.”

It’s claimed by the investigation agency that the board proceedings started in the year 2000 when Chanderwanshi and Darshan Kumar were shown as employed in defence forces and the rent worth Rs. 4.99 lakh was paid to Rajesh Kumar.

We hope that the culprits are caught soon and presented in the court of law.