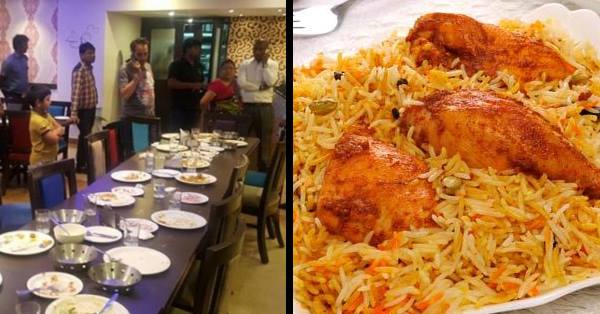 You can definitely imagine the frustration and reaction of a vegetarian, when he is given non-veg food to eat. The same was in the case of a Bengaluru family.
Hemant Khinwasara, a 32 year old businessman from Bengaluru went to dine with his Jain family at a pure veg restaurant and it led to nothing, but ruining of the entire evening. They went to Rangoli Veg Pure Multi-Cuisine Restaurant which is in Gandhinagar on Sunday at around 9.30 PM. This family visits this restaurant regularly. The family ordered veg biryani and jeera rice and found chunks of balls in the same. They got confused and misunderstood it as paneer or mushroom. After they finished the meal, they realized it was ‘chicken’.

They just fumed in anger and confronted the hotel staff and waiters and asked for the chef. By then, the kitchen employees and the chef had already fled. Ashwin Semlani, Hemant’s friend who was also with them for dinner stated that later when the police arrived, waiters told them that the wrong order was served accidentally. This was actually meant for customers who were staying in the hotel. The staff didn’t apologize and this enraged them more. After the complaint they came to know that at times, the restaurant does prepare non-veg food for customers.
See the video below to see the reaction of the family:-

The Lady Caught Travelling Without Ticket & Asks TC To ARREST MALLYA FIRST
Some Facts About Bhagat Singh, Sukhdev And Rajguru On Their Death Anniversary