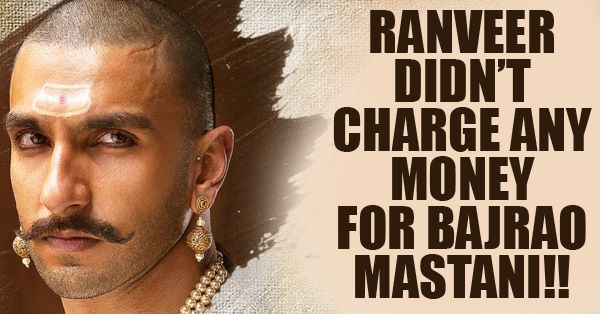 There is no denying the fact that Ranveer Singh has done much hard work for his upcoming movie “Bajirao Mastani” and we really don’t need any evidence to support this statement in view of the fact that it’s very much obvious from the trailer of the film itself. Nevertheless, it might come to you as a great surprise that even after putting in his best in the movie, he didn’t take a single penny from the makers of the movie. Yes, you heard it right!

As per bollywoodlife.com report, a revelation is made that Ranveer Singh did not charge any money for “Bajirao Mastani”. However, it doesn’t mean that he won’t be profited from the movie at all. Instead of his regular charge, the actor chose the option of profit sharing. At this point, it’s worth mentioning that he’s not the sole star who made this choice but several other B-Town actors worked on this model too; for instance, Aamir Khan, Ajay Devgn, Akshay Kumar, SRK and Salman Khan.

It seems a nice idea on Ranveer’s part, as public is very much interested in the movie and their excitement is augmented greatly after its trailer released!! So chances are likely to be less that it’s a risky deal for Ranveer!!

18 ‘Prem Ratan Dhan Payo’ Memes Which Are Better Than The Movie Itself
Facebook Deleted Her Account Only Because Of Her Name! Check Out Her Name