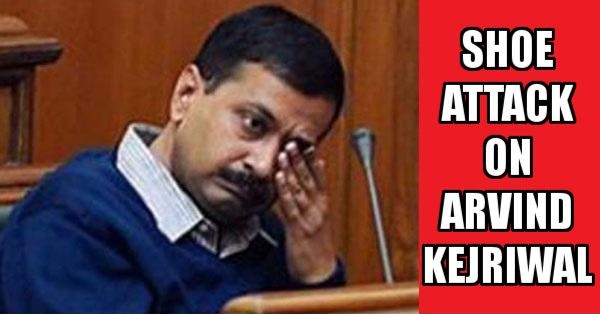 April 9, 2016 doesn’t seem to be a good day for Delhi CM Arvind Kejriwal as today he was attacked with a shoe while addressing a press conference by someone allegedly belonging to Aam Aadmi Sena which is Aam Aadmi Party’s breakaway group; however, the shoe couldn’t hit or harm him. Identification of the accused has been done; he is recognized as Ved Prakash (around 26-27 years old) and is taken into custody by police who interrogated him in this connection. The attacker raised issues like mishandling and carelessness while distributing CNG stickers. Not only this, Ved Prakash also alleged that he lodged a complaint with Delhi Chief Minister Arvind Kejriwal; nevertheless, no action was taken with reference to his complaint.

Watch The Video Of The Attack:

This tragic happening took place at Delhi Secretariat when the Chief Minister was addressing a press conference about commencing Odd-Even scheme’s second phase from 15th April. But the CM was lucky enough not to be hit by the shoe. Let us just tell you that previously too, a man slapped Kejriwal and once he was attacked with ink as well.

Meet Indian Man Who Built App In Just 4 Minutes For Which IBM Charged Rs 9.5 Crores
25 IPL Facts/Records You Should Know Right Away !!