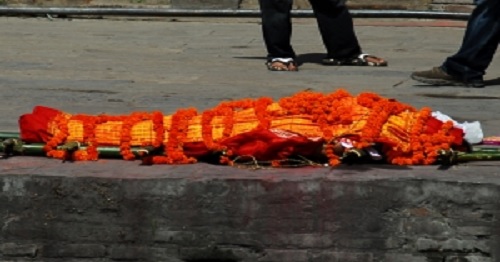 Since the A.P. Government has announced its plans to build the new capital, it’s looking to buy lands in Amaravati. This project has resulted in great demand for the existing lands in Amaravati. One great shocking incident has occurred in that place. The cremation of the body of a woman who ended up her life four days ago was performed by her relatives, as her sons were busy over a land dispute.

After the A.P government’s announcement of their new project, Gopala Rao made a good profit by selling off the land. He invested a fraction of this amount on some other property and spent the remaining amount lavishly. His further demand for more property led to domestic quarrels.

Laksmi finally left for her father’s place on 13th April and requested him to grant another property. When her father denied, arguments began between the two families and Laksmi left with no other option ended her life by consuming poison. In her death note, she has blamed her husband.

Gopalal Rao was forced by Lakshmi’s relatives to make her children the legal owners of the land and the house. He refused and the cremation of the body was delayed. Later Gopala Rao was convinced by family members to agree for the deal.

When the cremation was about to begin, heated discussions started up again between the two families. Both the groups deserted the body on the street and returned to their houses.