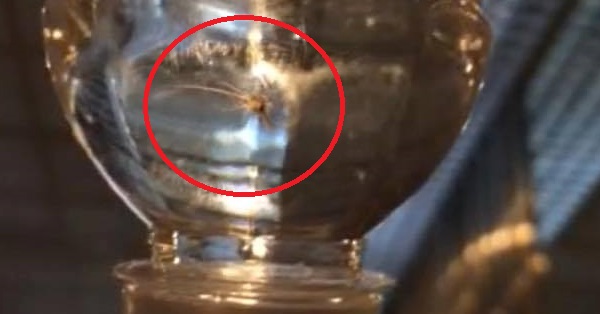 It’s not the first time when something is found in a packed item and previously also, we have come across cases where people found an unwanted object or creature in bottled and packed stuffs. Today, we present you the story of a consumer named Enosh Yeluchuri who has posted a video on Facebook complaining about a mosquito found in the complementary water bottle that he was given at the Rajiv Gandhi International Airport at Shamshabad. It’s natural for any sensible person to get angry seeing a mosquito in a sealed bottle which is a clear example of carelessness and playing with the health of people. Hence, the consumer wishes to sue that water bottle company and asks if anyone can get him in touch with a good consumer forum lawyer.

“I got a mosquito in the bottle which was complimentary at the Rajiv Gandhi intl airport. Shamshabad. Put me in touch with a good consumer forum lawyer. Want to sue these water bottle company. Have bills.”

Here we present you pictures of that sealed bottle along with mosquito as well as the bill Enosh Yeluchuri paid: Below is the video uploaded on Facebook by the consumer:

What is your opinion about it? Share your views with regard to the article in the comments section below.

Continue Reading
You may also like...
Related Topics:Mosquito In Bottle, SHOCKING: This Man Found A Mosquito In A Sealed Water Bottle

The Whole World Is Celebrating Her Last Birthday & Crying Their Heart Out. Reason Will Tear You Apart Too
Reaction of Girls on Jasleen Kaur Case!! This is What They Said!!