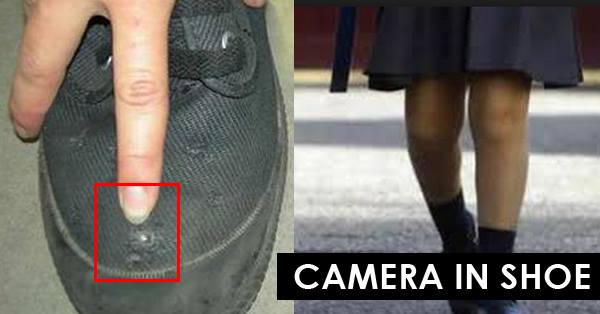 A 32 year old, corporate lawyer from Faridabad, Ashish Sharma was arrested by Delhi police from DLF Mall, Saket on the charges of making video clips of ladies, using a camera which was fixed in his shoes.

On Saturday evening, Ashish was wandering inside a cloth store where his strange behavior made the shop manager suspicious of his activities.  Ashish was standing in the store in a strange manner with his right foot very near to a girl who was wearing a skirt. The shop manager tried to find out the reason of Ashish’s strange behavior, after which Ashish tried to leave the place but manager called the security and Ashish was caught and taken to the security room.

When the security men checked Ashish for any suspicious belonging, Ashish himself revealed that he has a camera fixed in his shoes which he uses to make videos of ladies.

The police was called and on investigation, they found 12 video recording from Ashish’s camera, Ashish also told the police that he got this idea from an adult website. Ashish has been booked under different sections but he was released on bail, the same day. Police is also investigating that whether Ashish made the videos for his personal use only or he used them for posting online also.

Teenager Died Of A Heart Burst For His Obsession Of Building Body Like “The Rock”
10 Ways in Which Narendra Modi Shared His Digital India Campaign.