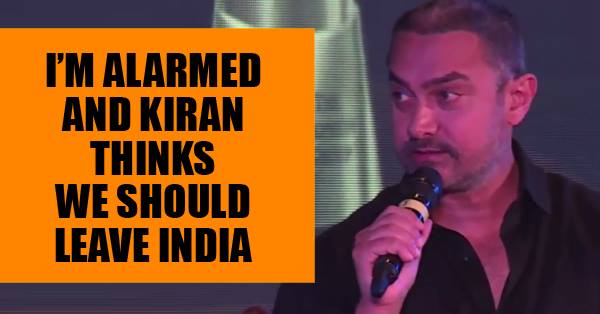 Since BJP came into power, popular celebrities have joined the war to express their grief against Indian Govt. However it’s personal choice that anyone can blame the Govt. but blaming Indians or India for anything is not acceptable. Such kind of incident happened recently where Aamir was invited for an interview

While talking with Anant Goenka, at the 8th edition of the Ramnath Goenka Excellence in Journalism Awards, Aamir Khan said “My wife Kiran says, should we move out of India. She fears for her child, she fears for atmosphere around her, she is scared to open newspaper”. He said a sense of “insecurity” and “fear” had seeped deep within society, including his family. He even mentioned that this doesn’t depend upon who is in Power. Violent acts happened during Congress too. So this has nothing to do with the party in power but recently intolerant is on rise in India.

But his remark of “Kiran says, should we move out of India” was extremely criticized on Twitter. Watch the one minute video that brought a storm on Twitter against Aamir Khan:-

Share your views about Aamir’s statement in comments section below. What do you think is it correct to blame whole country India because of few intolerance issues?

Pyaara Maggie Wapis Payo: If You Love Maggie, You Will Love This 61 Sec Song
Forget Pyaar Ka Punchnama! This Bollywood Ka Punchnama Is Many Steps Ahead & Will Make You ROFL