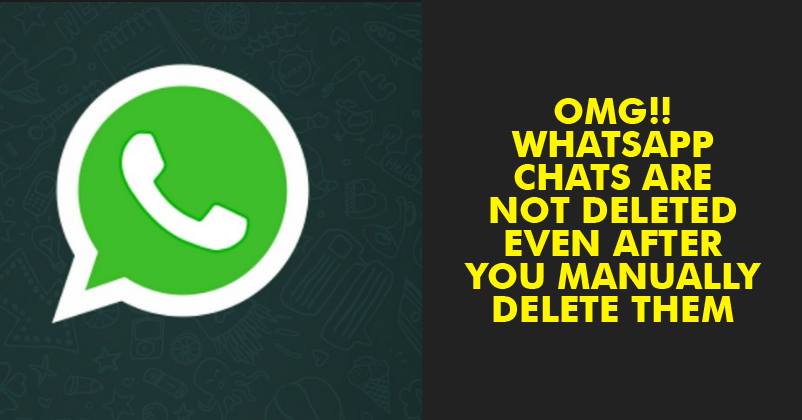 In a world where the word ‘privacy’ is just a mere crystal wall, it is just so prone to get shattered by the heavy distrust of various organizations and cyber criminals that you just can’t agree to the existence of word like ‘Complete Privacy’. On 6th of October 2014, Facebook acquired WhatsApp at a whooping price of 19 Billion dollar. And exactly just after 2 years later, it came out with end to end encryption scheme which promised complete privacy to all the Whatsapp Users. In fact, WhatsApp has joined the league of very few chat apps that offer complete end-to-end encryption.

However, things got a bit ugly and the apparent truth molded into a fictional fact when Apple’s iOS security expert Jonathan Zdziarski came out in open with reports stating that Whatsapp does not delete its chats permanently. After examining disk images recovered from the most recent version of the Whatsapp, Zdziarski found that the software retains and holds back a forensic trace of all the chat logs even after the user deletes the chats, thus creating a potential virtual yet invisible pocket of information for anyone having a physical access to the device. The same data can also be recoverable through any remote backup system which can be a potential backdoor virus or malware.

The data which has been apparently deleted by the user is marked as ‘DELETED’ by the app itself, but strangely it has not been overwritten, hence allowing an elbow space for many white and black hat hackers to extract out the sensitive information from those ‘DELETED’ marked data pouches. The main and only functionality of END TO END ENCRYPTION was/is to protect the information while it transits from one end to the other end. But if such marked pouches are left behind in the device itself even after deleting the chats, the security of many users are at risks.

However, this technology or findings by Zdziarski can be beneficial for recovering information from a suspect’s phone who can be standing trial for many crimes like murder, terrorism etc. These marked pouches of data are stored within the local hard drive of the phone itself and mostly in iPHONES, it is stored in the iCloud accounts without any hard encryption. Hence this may help the police to recover clear records of conversations through a court order, even if the conversation were deleted within the app. Zdziarski also explains that the Whatsapp users don’t need to worry about it. However, this news does raises questions on the recent privacy promises made by Facebook. He also went on to add that majority of messaging apps do leave behind similar traces which are recoverable through iCloud backups. Although a number of privacy-focused apps like “iMessage’ do not leaves a lot of forensic traces.

If you are thinking that WhatsApp does this purposely then you are wrong. “Just to be clear, WhatsApp is deleting the record (they don’t appear to be trying to intentionally preserve data),” he said.

So guys there is no need to freak out. Whatsapp is not going to introspect your private conversation which you had deleted a while ago. They definitely have a lot better things to do. If you have any extra information regarding this subject, please feel free to share it with us in the comment section below.

Here’s What ‘i’ in Your iPhone Means.!!
Mumbai To Maldives – A Trip By A Cruise – Perfect Point For The BucketList