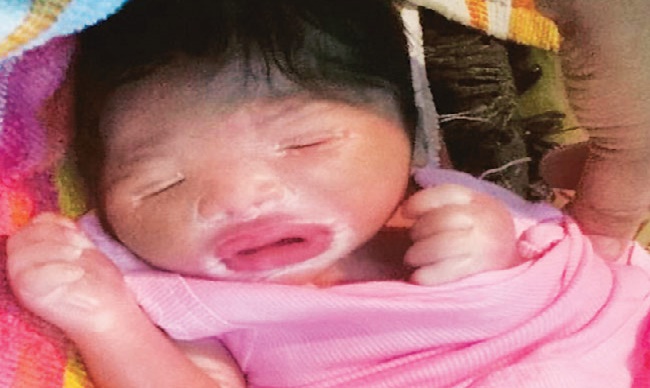 There would be hardly anyone who had heard or read something on the subject of a “plastic baby” having the appearance of a rubber doll. Moreover, plastic babies shed their skin just as reptiles do.

Here comes the news from Amritsar where a woman has given birth to a “plastic baby”. She belongs to the district’s Rajasansi area. Very soon, this news got spread like a jungle fire and the baby gained attention and interest of all and sundry. Needless to say, these babies are not usual or it would be better to say ‘exceptional’. Additionally, one out of 6 lacs newly born babies suffers from this genetic disorder and such infants are called collodion babies in scientific language.

On Friday, Guru Nanak Dev Medical College and Hospital’s doctors observed and checked up the newborn. According to one doctor who attended the infant, “The baby starts crying when someone touches her. She looks like a rubber doll and her face appears to be similar to that of a fish. Her eyes and lips are red hot. She is also not able to take feed from her mother.”

Head of the Paediatrics Department of the hospital, Dr M.S. Pannu, verified the news of a plastic newborn and affirmed of a collodion infant being brought there for cure and treatment. To quote what he has to say in this regard, “This is a kind of genetic disorder. It is due to mutation of certain genes and is usually an autosomal recessive, congenital ichthyosis (scaly skin condition).

However 10 per cent of collodion babies have normal underlying skin – a mild presentation known as ‘self-healing’ collodion baby. The skin of this baby, like others born with this deformity, is very thick.”

Pannu maintains that subsequent to birth, collodion newborns build up cracks in skin plus their membrane automatically peels off in the duration of about 15-30 days. Sometimes, their skin which appears to be coated with plastic becomes a threat on life because babies continually are prone to infection at the time of skin shedding and this condition persists the whole life.

Quite often, such infants are premature and identified with the name of plastic babies. At the time of birth, these babies sheath in the skin which bears resemblance to a tight, shiny, yellow film or sausage skin (dried collodion). The procedure of collodion membrane undergoing peeling is quite troublesome and aching.

As stated to Mail Today by Dr R.S. Bedi, Director and child specialist of a Chandigarh-based hospital known as Bedi Hospitals, “This is a very rare disease and is found in one among every six lakh babies. This is a kind of wax and shining skin which is also tight. At times the plastic babies report hypothermia and dehydration besides other problems. I treated one such baby a decade ago. The skin at times sheds itself within two to three weeks but the period is very painful for the baby which cannot close its eyelids.”

It’s the second newborn of its type to have been born in Amritsar. Previously in the year 2014, there born a collodion infant who died within a period of 3 days.

Shocking – This Image Of Nepali Kids Which Went Viral Over Social Media Is Fake
Shocking Video: A Traffic Police Constable Hits A Woman With A Brick