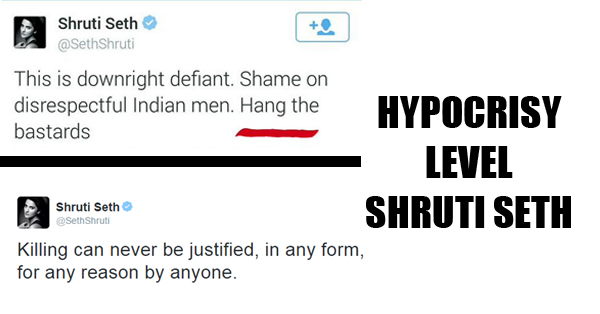 Where there is Controversy there is Shruti Seth. Shruti Seth recently gained popularity for her tweets and an Open letter she wrote against people who abused her for tweeting against the PM of the country.
Yet again she is in news with a new Controversy. She on Jan 29th 2014 tweeted for a Rape Case asking the authorities to Hang the rapists and even quoting Bast**s to those men who disrespect women. This is what she said then: This clearly shows her desire to kill the rapists who had ashamed humanity. She found no wrong in hanging them to put an end to Rapes in India.

Killing can never be justified, in any form, for any reason by anyone.

Saying that she caught herself in a controversy and faced strong reactions from her followers, who called her Hypocrite and raised questions for her Double standards on punishment to criminals.

Yakub a terrorist was hanged yesterday as he was one of the key persons involved in the 1993 Mumbai serial bomb blasts. Where there were many people supporting Courts decision to hang the terrorist, there were many who felt that Yakub was innocent and he was hanged for his brothers sins. Shahshi Tharoor, Shatrughan Sinha, Prashant Bhushan, A. Owaisi, Naseeruddin Shah, Mahesh Bhatt, Digvijay Singh, & Shruti Seth and many others were among those who felt that he deserved punishment but not Death Penalty & strongly opposed his punishment.