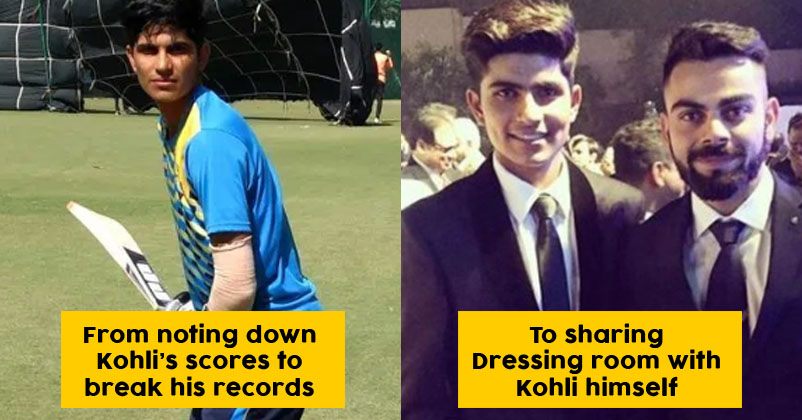 The boy who played two seasons for Kolkata Knight Riders and made a place for himself in the senior Punjab team at an early age. Shubham Gill was welcomed by two of the greatest players to have donned the Indian jersey Harbhajan Singh and Yuvraj Singh.

Till date in his cricketing career Shubhman Gill haven’t failed to contribute in too many matches in a row. Shubhman making his debut in Indian Premier League, he was part of the U-19 World Cup winning squad of team India under the guidance of legendary Indian cricketer Rahul Dravid.

The 20-year-old cricketer has been selected in India’s 15 man squad for the upcoming test series against South Africa. BCCI’s chief selector MSK Prasad said, we look at him as an opener as well as the middle order batsman.

Shubman took to his social media to share the news with his fans, he posted a picture donning the test jersey with the caption, Be it blue or white. It’s always an honour to represent my country.

Be it blue or white 🔵⚪
It's always an honour to represent my country 🇮🇳 pic.twitter.com/qfWMpwsMsw

After getting the maiden call Shubhman said in an interview with TOI, I’m ready to bat wherever the team wants me to. As per the reports of TOI, the young Shubhman Gill used to dig up Kohli, Rohit Sharma’s and Pujara’s record so that he could motivate himself to break those records.

As per cricview, When Gill was asked about does the maiden call bring any changes, he said, your game doesn’t change in any of the formats, only your mental ability and situation changes.

Shubhman had an average of 129 throughout the mega cricketing event. The 20-year-old cricketer recently was the captain of India A side who won against South Africa A with a seven wicket victory.

Gill has an impressive average of 72.15 in first class cricket by now he has proved to be pliable as an opener or no 3 batsman during the last season of IPL. Well, that isn’t easy.

20 year old Shubman Gill gets his maiden call up into the Test team as he replaces KL Rahul in the 15 man squad.

#ShubmanGill is upcoming Indian captain all the best buddy pic.twitter.com/bu7TXX78CZ

Sun is rising…
world once again see the one of the best player…..

Becoz some players are born for being legend.. #ShubmanGill #Bestwishes #always #withyou

@RealShubmanGill the future of Indian cricket, Finally got maiden call up for test matches against South Africa. Congratulations Man👏 Hope you'll do well and make a permanent place in Indian team..#ShubmanGill #INDvSA

Maiden 🇮🇳 Test Team Call-up following a victory as India-A captain 🔥
.
.
Drop in a 💜 if you are excited to see #ShubmanGill in whites for #TeamIndia

Finally #ShubmanGill gets a much deserved call. Hope they play him through out the series. Although, going into a series with just 3 seamers is going to be tricky for #Kohli #INDvSA #Testsquad Why no Pandya?

Good luck @RealShubmanGill.
This is your moment, go grab it!! #ShubmanGill#INDvSA#ThursdayThoughts

Great to see Shubman Gill in India's test squad for South Africa's Tour of India. This guy has the potential to deliver at the bigger stages. Finally, he got what he deserved.

Hope, he does well and makes his spot Permanent in each format..#ShubmanGill#IndianSquad

Continue Reading
You may also like...
Related Topics:Shubhman Gill

Only Females Are Recommended By Sports Ministry For Padma Awards, Twitter Is Celebrating
Messi Discloses The Reason Why He & His Long-Time Rival Cristiano Ronaldo Are Not Friends