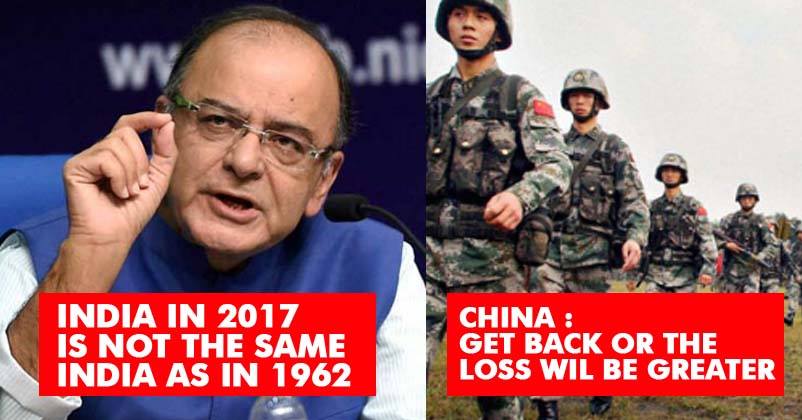 The tension between India and China is increasing day by day as both the sides are engaged in verbal wars and the border standoff in the Sikkim section doesn’t seem to resolve any sooner. The Chinese media is of the opinion that a “bitter lesson” should be taught to India and it has warned that if India gets engaged in a military conflict with China, it will experience more losses in comparison to 1962.

We just want to make it clear that Chinese media is run by the state, so basically it can be considered the mouthpiece of Chinese government. This reaction came after Indian Defence Minister Arun Jaitley stated that today’s India is very different from India of 1962.

An editorial which was published in Global Times stated,

“The Chinese public is infuriated by India’s provocation. We believe the Chinese People’s Liberation Army is powerful enough to expel Indian troops out of Chinese territory.”

It also said that New Delhi is wrong if it feels that it can influence the situation in Donglang area using its military power. It read,

“We have to tell India that the Chinese look down on their military power. Jaitley is right that the India of 2017 is different from that of 1962 – India will suffer greater losses than in 1962 if it incites military conflicts.” The editorial also asked Chinese people to unite so that the professionals would get good conditions to fight against India as it said, “This time, we must teach New Delhi a bitter lesson.”

However, it also talked about solving bilateral issues peacefully:

“China still wants to address disputes by peaceful means, a practice that has been maintained for decades, and it is unwilling to face a pattern of confrontation in the border area.”

India was accused of changing its stance, as it said,

On June 6, Chinese army destroyed Indian bunkers and since then, this standoff is going on. Chinese media is constantly blaming India for increasing the tension in the border area and it is leaving no chance to remind India of 1962 war. The whole matter relates to the plateau, which lies at a junction between China, the north-eastern Indian state of Sikkim and Bhutan, and is currently disputed between Beijing and Thimphu. India supports Bhutan’s claim over it and is concerned about it because if the road is completed, it will give China greater access to India’s strategically vulnerable “chicken’s neck”, a 20km wide corridor that links the seven north-eastern states to the Indian mainland.

However, the Chinese Foreign Ministry spokesperson Gen Shuang accused India of “misleading the public” while he was talking to reporters in Beijing. He said,

“In disregard of the 1890 Sino-Britain convention, the Indian side said that Doklam is located within the tri-junction of the three countries that is misleading the public. The 1890 convention said that the Sikkim section of the boundary commences from East mountain and the incident (of road building) took place about 2,000 meters away from Mount Gipmochi.”

As per him, the standoff has nothing to do with the tri-junction point. He has also defended building the road by the Chinese which has been objected by India and Bhutan both.

India doesn’t want road to be built, as it will give a chance to Chinese army to cut-off India from its north-eastern states.

We hope both the countries will not prefer to go to war, so the matter should be solved peacefully. At one fell swoop, Chinese media should show some maturity and practice restraint in their statements.