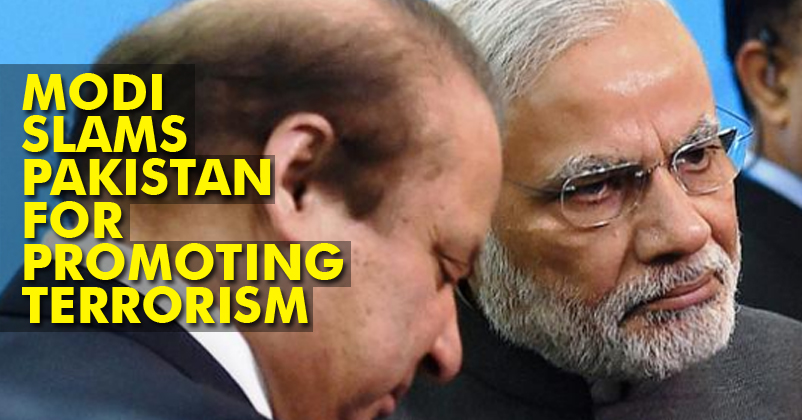 Prime Minister Narendra Modi is known for his fearless and outspoken nature, he always puts the nation and the welfare of the citizens first before the politics. Modi knows how to smack someone without even taking their names. This is what happened on Monday when he took an apparent dig at Pakistan for spreading and supporting terrorism.

The occasion was the concluding session of the of the G20 Summit in Hangzhou. In his speech PM Modi blamed a “single nation” for spreading terror in the region. Although he did not take Pakistan’s name directly, but in a subtle way. He clearly hinted the nation for whom the message was meant for. PM Modi left a very little doubt in the minds of the spectators about the nation he was referring to. Vikas Swarup, the Official Spokesperson of Indian Ministry of External Affairs tweeted this, highlighting the important quotes of the Modi’s speech.

He accused Pakistan of spreading terrorism in the South Asia and using this terrorism as an instrument of state policy. He also made an appeal to other countries, he said,

“India expects the world community to speak and act in unity and to respond with urgency to fight. Those who sponsor and support terrorism must be isolated and sanctioned, not rewarded.” The two-day G20 summit which began in the eastern Chinese city of Hangzhou. During the various sessions of the summit, India raised the issue of terrorism. Modi also made his stand clear on the burning issue of terrorism, he said,

“India has a policy of zero tolerance to terrorism because anything less than that is not enough. For us, a terrorist is a terrorist.”

His views on terrorism in his speech came shortly a day after he had asked the international opinion on countering terrorism and isolating Pakistan. He said,

“Growing forces of violence and terror pose a fundamental challenge”

In his meetings with leaders such as Chinese President Xi Jinping, Russian President Vladimir Putin and Australian Prime Minister Malcolm Turnbull, he discussed about the methods to counter the international terrorism.

Transcript of the Modi’s Speech Relief For Dhoni As Supreme Court Discards The Case Against Him
Passenger Receives A Whopping Rs. 9 Lakh Bill For Traveling With Ola !