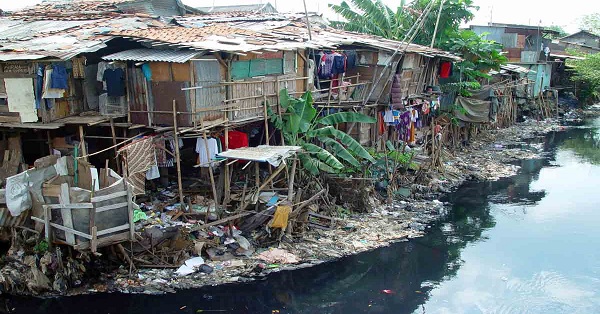 ‘Slum’: A word that is enough to make your mind ponder on a dilapidated state of living conditions. Many would frown at the mere thought of them so think what can be the life out there. The condition is such that people use common latrines and water taps which can lead to many diseases.

According to recent estimates Maharashtra, Uttar Pradesh, Andhra Pradesh and Madhya Pradesh will be having largest share of slum population in India by 2017. Not everybody liked ‘Slumdog Millionaire’ as much as the Oscar committee did.

Aside from slum dwellers offended by the title, some critics lambasted its portrait of life in Dharavi, the biggest slum in Mumbai, as exploitative. Gujarat has become the first state in the country to take up public-private partnership projects for in-situ redevelopment of slums in urban areas under the recently launched Prime Minister’s Awas Yojana. Here are some facts and heart aching pictures from some slums of India that show that their lives are worse than the lives of animals. 65 million people live in slums in India, says census data. According to Government sources, the slum population of India exceeds the population of Britain.

2. Homes can be bulldozed anytime Slum dwellers fear the constant threat of having their homes bulldozed in municipal ‘slum clearance’ efforts. Nonetheless, slum life is animated by a strong sense of joie de vivre. Slum conditions are as unimaginable in even wildest of our thoughts. The situation is such that 15 to 20 people live in the same room and do all the daily activities there itself. Most of the highly serious diseases are environmental because they are transmitted through air, water, soil and food or through insect or animal vectors. Also there is a chance that these turn into an epidemic as the conditions are very unhygienic. Mumbai ‘The Dream city’ holds the biggest slum area in India known as Dharavi. Asia’s largest slum, Dharavi, is spread over an area of 1.75 km along the Mahim river in central Mumbai. Dharavi is just one of many slum areas in city of Mumbai. In ‘The Heart of India’ the Slum population is considered as 20% of the total population of Delhi, It also has largest child labourers. Slum dwellers from various parts of Delhi have been resettled to Bhalswa. Delhi Government is thinking to launch a survey to prepare a data base of slum dwellers in the city to help them. ‘The City of Joy’, Kolkata has slum area known as Basanti slum. It is one of the major slum areas in Kolkata. One third of Kolkata’s population lived in 2011 registered and 3500 unregistered slums. ‘The garden city’, Bangalore alone holds 570 slums from the total of around 2000 slums in the whole state. It is estimated that about 20% of Bangalore population resides in slums. The families living in the slums are not ready to move into the temporary shelters, saying it is unjust and risky to live under a flyover. As per the latest comments from people of Bangalore, Rajendra Nagar Slum does not exist now and all the slum dwellers have been rehabilitated. ‘The City of Nizams’, Hyderabad has around 624689 people living in slum areas. There is very little land available for all the people and they live in 104 identified and 24 unidentified slums in Hyderabad. ‘The Orange City’, Nagpur has 424 legal slum areas. Sarojnagar is just one of the 424 slums in the city. In Nagpur, approximately 40% of the population lives in slums. These slums are home to over 1,42,000 people and cover about 1,600 hectares of prime land. It is the second largest slum area in Maharashtra after Dharavi, Mumbai. ‘The City of Nawabs’, Lucknow’s population includes large numbers of poor people, many of who live in slums. 20000 persons living in 22 of the 460 slums in Lucknow city. Many people have migrated to Lucknow from different parts of nearby districts for daily wages.

So how did you feel? Do not forget to share your views in comments below.

Continue Reading
You may also like...
Related Topics:Slums, slums of India