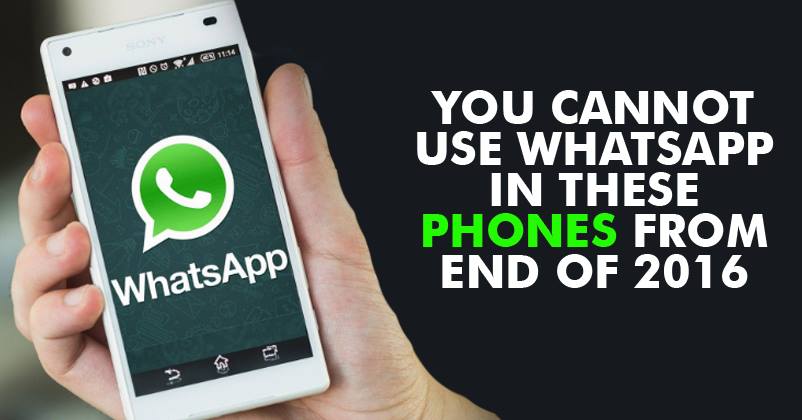 Needless to say, WhatsApp is one of the most commonly and widely used platforms at the present time for the purpose of communication. Due to its amazing and easy to use features, it gained immense popularity in a very short span of time and now, a large mass depends on the app.

However, an announcement made by WhatsApp might have disheartened few smartphone users having older smartphones which will no more support the app by the end of this year.

Yes, WhatsApp is planning to discontinue compatibility with older smartphones and is making up mind of paying more attention on mobile platforms used by a large mass of individuals. Here’s what a WhatsApp spokesperson stated,

“While these mobile devices have been an important part of our story, they do not offer the kind of capabilities we need to expand our app’s features in the future.”

Below is the list of mobile platforms & their versions that WhatsApp will not support in the year 2017:

However, these devices would avail extended app support till June 2017: According to this list, majority of Android devices will support WhatsApp and it’s definitely a good news for users of Android smartphones; nevertheless, the app will not be supported by iPhones with iOS 6 and earlier versions.

Is your phone in this list? If not, you don’t need to worry but if it is, you must have to look for an alternative to continue using the services of WhatsApp!!

Kejriwal’s Tweet On Amma’s Death Didn’t Go Well With Twitter! Here’s How They Reacted!
Kerala Man Attends His Own Marriage Online From Saudi Arabia! The Most Unique Wedding Ever!