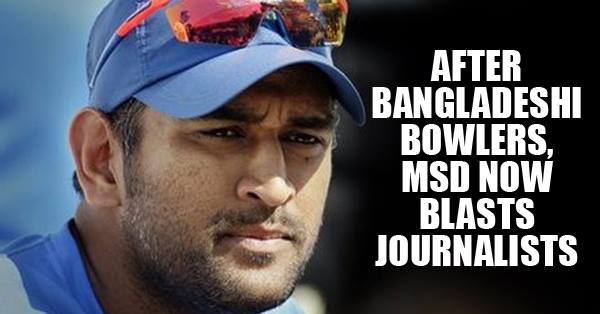 Mahendra Singh Dhoni has just slammed at the journalists stating that they are using ‘Freedom of Expression’ way too liberally, than it should actually be used when it comes to cricket.
He believes that everyone in India has an opinion on issues, especially when it comes to cricket. Everyone just says do like that, do like this, play like that, play like this. However, no one ever realizes that watching cricket on TV is easy, but playing it at the ground is way too difficult. Image source
Last night, India was crowned as an Asia Cup champion for the 6th time after an 8-wicket victory over Bangladesh. When asked what he would like to do, Dhoni says that he would like playing cricket for India rather than playing for other countries.
However, he says that individuals mustn’t get bogged down by criticism or take themselves seriously when praised. Even the media balances it. He further says that “If they take you up they will also bring you down. If you are up on a parachute, you can delay your coming down, but eventually you will come down. And then they will again throw you up.”
The media and the Bangladeshi crowd has been quite hostile & unfriendly to the Indian team after they lost the World Cup quarter-final. He says that people speak both ways. If they don’t win, people say ‘you lost to Bangladesh’ and even if you win they would say ‘not a big matter! You ought to win’.
Dhoni has put this point across Bangladeshi media perfectly.