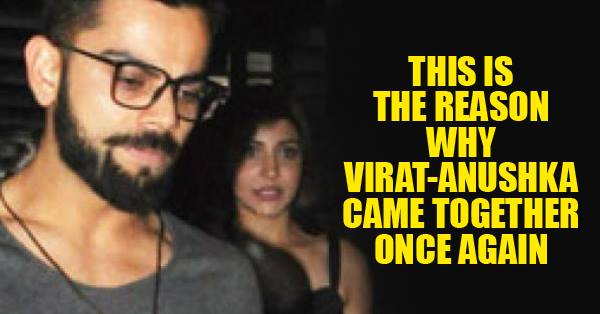 We just gave you good news about the cricketer Virat Kohli and actress Anushka Sharma that the couple is together again and showed a photo too in which they both were seen coming out of Royalty after having dinner together.

It’s really good that the duo have resolved their issues and given a second chance to each other as they both look awesome together and now let us tell you the reasons as to why they parted ways. The relationship got in trouble when the differences crop regarding career and marriage. Virat wanted to get married and start a new life with the actress. Not only this, he also wanted her to call a quit to her Bollywood career for which Anushka was not at all ready, as Anushka is doing pretty well and besides acting in movies, she is also running a production company.

However, now Virat has shown a more understanding approach and has no objection with Anushka working in Bollywood, which resulted in couple coming back together.

A person who is close to the couple disclosed:

“Anushka and Virat separated because he did not want his actress girlfriend to continue working in the film industry.” He further revealed, “Anushka was working on ‘Sultan’ and has an interesting line up of movies in the coming days. She is in the prime of her career and quitting Bollywood and getting married was not something she wanted as an individual. The fight was over this clause, but all that has been sorted now. Virat realised that he truly wants Anushka by him and he dearly loves her. Anushka too has let the differences go and feel equally strongly about Virat.”

Well, it is a win-win situation for the fans of the couple as they will not only see them together but also watch movies of Anushka.

EXCLUSIVE: You Won’t Believe It! Kangana Wants Hrithik Roshan Arrested
We Bet You Didn’t Know Yellow Teeth Is Healthier And Stronger Than White Teeth! Science Has Proved It!